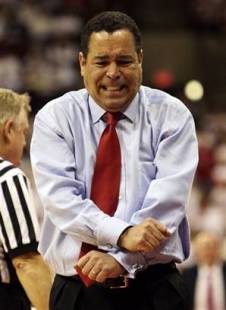 Update #2: The hearings concluded late on Saturday and The Hoosier Scoop has comments from Rick Greenspan, Jerry Meyer and Rob Senderoff’s attorney. The case is now in the hands of the infractions committee and it could be as long as six weeks before the results are made public.

Update: The hearings will continue into Saturday. No big news from Friday, but reporters from the AP caught up with Sampson and here’s what he had to say about the hearings: “It went well. It’s a process. We’ll be back tomorrow.” That’s some groundbreaking stuff, Kelvin. IU officials had no comment.

Today, Kelvin Sampson has his date in court with the NCAA — the day he’s supposedly been looking forward to in order to set the record straight. So what happens on this Friday the 13th? Does Sampson win the court over and pull out an O.J. Simpson-esque victory? Does the courtroom turn into a scene from A Few Good Men … YOU CAN’T HANDLE THE TRUTH!

And most importantly, how worried are we the NCAA is going to drop the hammer and further sanction the men’s basketball program when a decision is announced a month or so from now? A little worried? Sort of worried? Not really worried because the penalty will be light if there’s any penalty at all?

(Those of you looking for specifics of how everything will go down, Mark Alesia of The Indianapolis Star has you covered.)

Holler at us in the comments with thoughts and we’ll do our best to get some coverage up as the day unfolds.

Also, for some background on how it’s all come to this, check out our time line with links to coverage after the jump…