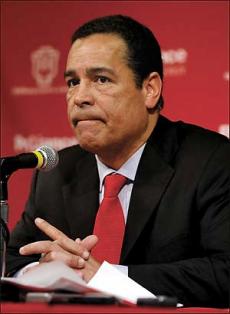 The most interesting part of my first glance through the NCAA case summary was Kelvin Sampson’s explanation of his practices for checking caller ID. There are a lot of “uh’s” and contradictions. What’s that you say? You’re not surprised? Me either.

Neyland: And what about in terms of caller ID? Were there numbers popping up on your phone?

Neyland: You could actually see the numbers?

Sampson: Sometimes, sometimes it wouldn’t matter. If it was a number that wasn’t plugged in, uh, as, uh, I would answer the phone not knowing who it was and, like, take my sheet and see if that, uh, corresponded.

Glazier: And make sure you’re clear on, on between cell phone and home phone, too.

Sampson: Yeah, The home phone, the caller ID didn’t show up until after the second or third ring. It only showed incoming call. There was no caller ID on my home phone.

Neyland: Now, with respect to your cell phone, is it safe to say that you would on a consistent basis or pretty much always look at the caller ID and, and maybe try to figure out who it was or?

Sampson: Uh, just, just depends on how many I had in a row. Uh, uh, a lot of times when the phone would ring, I may glance at it, but as I was going from my couch to the front door, I’m just trying to get a connection.

Glazier: There’s also an assumption in the question that you look at the, at the caller ID each time you answer it, and you need to tell him whether or not that is or is not the case.

Sampson: No. I don’t always look at the caller ID, wouldn’t have mattered. I had to take the call and if it’s a number I didn’t recognize, I’m trying to search to see who it is.

Sampson in a conversation with Ice Miller councel Robin Miller

Sampson: Uh, there was a lot of, uh, you know, we’re going back a year and a half now. Uh, lot of instances when the phone ran, I, I, you know, neither paid attention to the caller ID or it might’ve been a number I didn’t recognize. Like, some of these guys had so many different cell phone numbers, I, I didn’t know who it was that would’ve been calling. Uh, during, Mark asked me last time, do you always look at the caller ID? I, I do now, and I probably did before the sanction period. But during the sanction period, if the phone rang I answered it, home, home and the cell phone.

Harris: Can I clarify one thing? Do you remember every prospect calling you or someone related to each of the prospects mentioned calling you?

Sampson: Both. I remember just the, the, the only time I can, the only time, uh, time I could talk to those guys were, I had to wait on ’em to call. A lot of times they would give me a list I’d take home. Uh, they said, coach, if this number shows up on caller ID, here, here’s who it is. Problem is that it’s not always the number that showed up. It was always different numbers…uh, and, you know, coach Sen, Senderoff, coach McCallum, coach Meyer, coach Senderoff called my phone more than anybody. Uh, and usually when he called me it was to say did so-and-so call you? And I’d say, no, haven’t heard from him yet. And he said, okay. I’ll, I’ll, I’ll, I’ll call his coach and make sure he calls you. So, uh, he’ll call you in five minutes. So between, in those five minutes, I might’ve had three other calls coming in. So, I’m talking to whoever’s, whoever’s on that phone, and a lot of times I didn’t know who it was. I’d say, hello, and the kid would start talking. Uh, and it might not have been the number, it might have not been the number. I mean, these kids have so many different cell phone numbers today. Uh, I didn’t, uh, then usually when I’m on the phone with a kid, kid, especially in August, September, OCtober, November of that year, there’s just so many calls coming in to my, uh, phone that it didn’t matter. If sometimes, year, most of the times I look at caller ID, uh, it’s a habit, uh, we all have. But it wouldn’t have mattered. I had to answer the phone.