Sampson and IU media relations: Nevermind that big crimson elephant over there, please 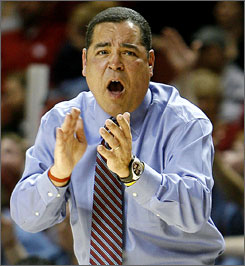 It’s not exactly surprising, but it doesn’t make it any less annoying: Kelvin Sampson refused to address the issue of sanctions today at his press conference. From the Herald-Times’ blog, the Hoosier Scoop:

Sampson had an opening statement and said that he wouldn’t discuss the violations because the review by the NCAA is pending.

He was then asked if the news has been a distraction. He said it has not been. He told the team Sunday what was happening. Since then, they have only been practicing and concentrating on getting better.

“My responsibility is to coach this team,” he said.

I then asked why he was able to discuss the violations on Sunday but not today and he said that we were getting off topic.

Sorry Kelvin, but your responsibility is to run a program whose fans, whether rightfully or wrongfully, have very high-minded moral standards for their competitive athletes, and your responsibility is to run a program that complies with standard and enforced NCAA sanctions. When you fail to do that, your new responsibilities include being open and candid with the public whose trust you essentially betrayed — you are publicly paid, after all — about your massive screw up.

To do anything otherwise is to fail those responsibilities, something Sampson seems to be getting awfully comfortable with.

A disclaimer: Do I think Sampson’s situation is that big of a deal? No, I don’t. That’s a topic for another post, one that will likely be coming tomorrow. But whether the situation is big or not, to totally dismiss questions about it — to pretend like nothing is happening, nope, nothing to see here, not at all — I mean, how dumb do they think we are?

If you want press conference highlights, head down below. More anger early tomorrow.