Jerry Green: “No way that could’ve been an accident” 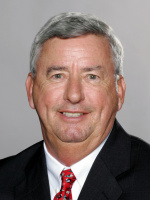 Jerry Green, the former director of basketball operations, spoke to the NCAA assistant director of enforcement Mark Neyland back in December as part of the investigation into impermissible phone calls. Green was with Sampson at Oklahoma in 2005-2006 and spent a season in Bloomington before retiring in May of 2007.

Here’s a transcript of Green’s conversation with Neyland, from the NCAA case summary:

Neyland: Now, it’s uh, Indiana University has reported a, a number of phone calls, uh, that, uh, they believe have violated the Committee on Infractions’ sanctions that were in place. I guess the, the, the question I, I have to ask you, uh, as being sort of overseeing the compliance of that, in your mind, how, how could that have happened?

Green: In my opinion, I don’t, I don’t, I, I see absolutely, uh, no way, uh, that that could’ve been an accident, that they, it had to have been done purposefully because there was too much information that was given to the coaching staff, uh, in my opinion, to keep them from making a major mistake. That they were informed, maybe not the first day, maybe not the first month, but after it got going, everybody, in my opinion, knew the process, what we needed to do and I, I don’t see any way possible it could have happened, uh, legally.