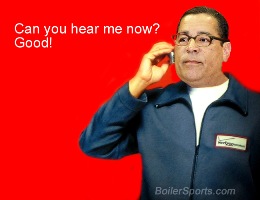 ESPN.com just dropped a bomb on us, folks: the NCAA sent a letter to IU last Friday detailing major — not secondary like all the phone call nonsense we had to endure earlier this season — violations in the men’s basketball program. A quick blockquote of the particulars:

Larry MacIntyre, assistant vice president for university communications at Indiana University, confirmed to ESPN.com that the school did receive documentation from the NCAA last week.

The Associated Press reported on Tuesday night that the school will make the allegations public on Wednesday. University trustees president Stephen Ferguson told AP that school officials this week reviewed the report, but that the NCAA is not expected to make its ruling until this summer.

“There won’t be a hearing till this June,” Ferguson told AP. “It’s just been reviewed, and I think everyone is analyzing it now.”

OK, so the good out of all this: looks like this season is not in jeopardy, since nothing will come of this till June. But then there’s the bad news: oh, the bad news. At this point, I’d prefer not to get overly reactionary. I’m trying to sit here calmly in my living room just past midnight on Feb. 13, 2008 and think all is well with the team I love; the team I write about; the team I’ll follow till the Good Lord takes me from this Earth.

But this is just not the case. Rick Greenspan took a risk hiring Kelvin Sampson. He’s a great coach and knows his stuff, but there was baggage there. And it’s followed him to Bloomington. Whatever these “major” violations are — and by the time you read this, these may already be known since the University is making them public today — it’s not anywhere near a stretch for me to say that Sampson is likely done at IU. And Rick Greenspan might well be, too. Sampson isn’t even through his second year at the helm and already two incidents have come up; when Greenspan hired Sampson we were told any nonsense and he’d be shown the door.

Earlier this season, I wrote that as fans, we’re justified in booing our players if they don’t preform as we’d like them to. (A bit harsh, I know. Many did not agree.) But if you’re sitting — nay, standing — inside Assembly Hall tomorrow night when IU toes the court against the Badgers and Kelvin Sampson is introduced over the loudspeaker, go ahead and boo. Boo loud. Boo hard.

After all, this isn’t a kid’s shaky mental framework you are going to work over and make fragile. This is a grown man making repeated mistakes at one of the most storied programs in the nation — his actions are almost certain to set the program and team you love — we all love — back a few years.

If you’ll excuse, I’m going to go throw up, crawl into my bed and cry myself to sleep now. It’s all I really feel like doing.

A.M. edit: Just so everyone knows, I actually got a very nice night of sleep. I’m still pumped about tonight’s game and this next stretch here and will continue to root hard for the team. It’s all I’ve done; It’s all I’ll ever do.