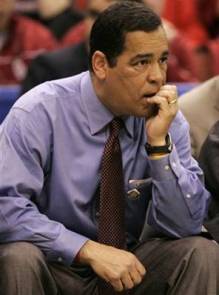 (Editor’s Note: For a partial transcript of the teleconference with Rick Greenspan, Kelvin Sampson and Grace Calhoun, click here.)

First, a preface: I like Kelvin Sampson at the helm for IU. I think he is a good, smart coach who’s been around long enough — he’s heading into his 25th year of coaching — to know the ins, the outs, the ups and the downs of basketball at the collegiate level. That being said, there were two major qualms when Rick Greenspan announced he’d be taking over the head coaching position. The first being: could this guy actually step into a “big-time” program and succeed? I mean, who the heck was this Kelvin Sampson guy, anyways? I think the answer to that is a decisive “yes” at the moment. Yeah, we have a small sample size to go on, but so far so good, right?

Second, and perhaps of equal importance for some IU fans: people were worried about the sanctions, the impermissible phone calls and whether or not Kelvin Sampson would waltz in here and strip away our supposed high ethics and clean program some out there are very proud of. But hey, that stuff happened at Oklahoma. It didn’t happen here. We were in the clear, right? Well, not really.

And so the answer to the second qualm at the moment is a decisive “no.” Look, let’s get one thing straight, everyone is doing this type of stuff. College basketball recruiting is a dirty game and coaches and programs cut corners all the time. (I would say Bob Knight is the exception to this and I think that’s why some people are so infuriated with Kelvin Sampson right now. But on the same accord, Knight’s unwillingness to adjust and adapt to new ways of recruiting and handling his players — you know, not grabbing or hitting them — led to his downfall at IU.)

Now, I’m certainly not condoning what Sampson and his staff did here. Even though the internal investigation turned up some very minor stuff — Sampson being in on 10 three-way calls, the staff making 35 more phone calls then allowed — it’s still unacceptable for a guy that’s on such thin ice to begin with. It’s bad for the program; it’s bad for the school; heck, it’s bad on the recruiting front — we lost a scholarship because of this. Although, it’s essentially Bud Mackey’s scholarship, so it doesn’t hurt us quite as much as it could have.

And I just don’t know if I buy Sampson’s explanation on the three-way calls. Via the Indy Star:

“All of the calls were kids that were calling me. Our coaches did a great job in telling kids that ‘Coach can’t you call you because of the sanctions so will you call him?’ And that’s what we did. I found out about the three-way calls after they looked at the records. They saw that there had been three-way calls made and found out that Rob (Senderoff) had, after the kid had called me and tried to reach me on my cell phone, they would call coach Senderoff back and say ‘Coach Sampson was unavailable. I tried him on his cellphone. So what Rob was doing was patching the calls into me, and I was getting them not knowing that Rob had made the connection. But when I answered the phone in these situations, the kid would start talking.”

“So I was basically an operator. And instead of hanging up, Rob would stay on, because if he hung up the connection would be lost. And this was 10 calls out of thousands. And it’s disappointing. We’re trying to get 100 percent compliant here. We had 10 out of thousands, and that was 10 too many.”

I don’t know. I want to give them the benefit of the doubt here, but again, how could they be so careless, so sloppy and so stupid if they knew they were under such a microscope during Sampson’s year-long penalty? Did they know what they were doing was wrong, but decided to do it anyways? I’d tend to think that. Maybe the three-way calling was a mistake, but they had to have known they made too many phone calls in the allowable span. I mean, this is what Sampson got in trouble for at Oklahoma and in his first year here the coaching staff accidentally does the same thing? I just don’t buy that.

In the end, this will all pass. Eric Gordon will start wowing us; D.J. White will dazzle and Eli Holman will be a treat. We’ll put this to the back of our minds. After all, it could have been much worse.

But still: it’s a bit unsettling our coach has been penalized twice and he’s only been here seven months. Unsettling, indeed.