Note to self: Don’t ask Kelvin about sanctions 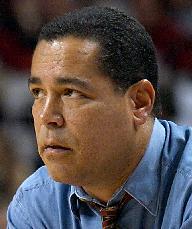 Dan Barreiro, Indiana grad and radio host (and a very good one, I might add) for KFAN in Minneapolis, had Kelvin Sampson on for an interview Wednesday afternoon. It was a standard interview: they talked Eric Gordon, D.J. White, Indiana’s record to this point and Tubby Smith. All seemed to be going well. Until Barreiro asked Kelvin about the pending situation with the NCAA and his future at Indiana.

You can listen to the interview here, but I’ve also transcribed for your convenience below:

Barreiro: Let’s finish up with this. You had a frustrating preseason, you’ve got a NCAA investigation that’s still kind of sitting out there. The people I’ve talked to in Bloomington, having graduated from Indiana I try to stay somewhat connected there, have some concern about what happens to you at the end of the season given the investigation. I know you lost a coach before the season began, the three-way calling, whatever you want to call it, are you worried about your own future?

Sampson: That’s about as far as my worries go.

Barreiro: Thanks Kelvin, we appreciate the time.

I mean seriously Kelvin, can you not issue a standard response to this question? Do you really feel the need to become defensive and finish a radio interview without saying “no problem” or “thanks” because someone asked you about a situation that you caused yourself? This issue isn’t going away. It’s going to continue until a resolution is reached and when you get to the NCAA Tournament, you better be prepared to be asked about it a million times.