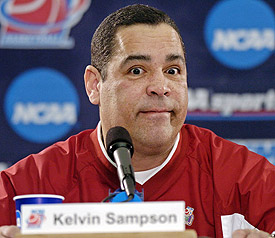 Just as he did four months ago when IU’s self-reported violations came to light, Kelvin Sampson dodged questions about his latest violations this evening in the post-game press conference. Doug Wilson of the Hoosier Scoop has the details:

Sampson has read a short statement saying he’s aware of the NCAA statement of allegations and will make no further comment after tonight about them until after the NCAA’s process is complete.

Sampson said he never intentionally misled the NCAA investigators and he looks forward to working through the NCAA process.

Here’s one related question he did answer. He was asked what he thought about the reaction of fans tonight and said he didn’t notice it.

Second thing is second: I recommend you read E’s post I linked up top from October because it lays out why Sampson is obligated to answer this questions far better than I can. A small sampling: “Sorry Kelvin, but your responsibility is to run a program whose fans, whether rightfully or wrongfully, have very high-minded moral standards for their competitive athletes, and your responsibility is to run a program that complies with standard and enforced NCAA sanctions. When you fail to do that, your new responsibilities include being open and candid with the public whose trust you essentially betrayed — you are publicly paid, after all — about your massive screw up.”

Third thing is third and a bit off-topic for this post: A lot of people called for Sampson to be fired ASAP today in Big A’s post. I am not one of these people. I do think he will get fired; I think he should be fired. But not until after the season. The NCAA has yet to rule on this, so I think it would be rather reactionary if we cut Sampson loose tomorrow. But waiting till June when the NCAA does rule is too long — it puts us a bit behind for next year and a coaching search. So, IU should drop him just after this season ends. I think if IU lets him go now, that punishes the players and they have nothing to do with this. (And, as a selfish fan, I want this team to ride out the season with the same coach — it gives us the best chance to succeed from here on out. Tonight’s loss was rough, but given the right circumstances, we have a chance to do well in the tournament.) And lastly, I want D. J. White to finish out his senior season they way it was supposed to be carried out. He deserves nothing less.