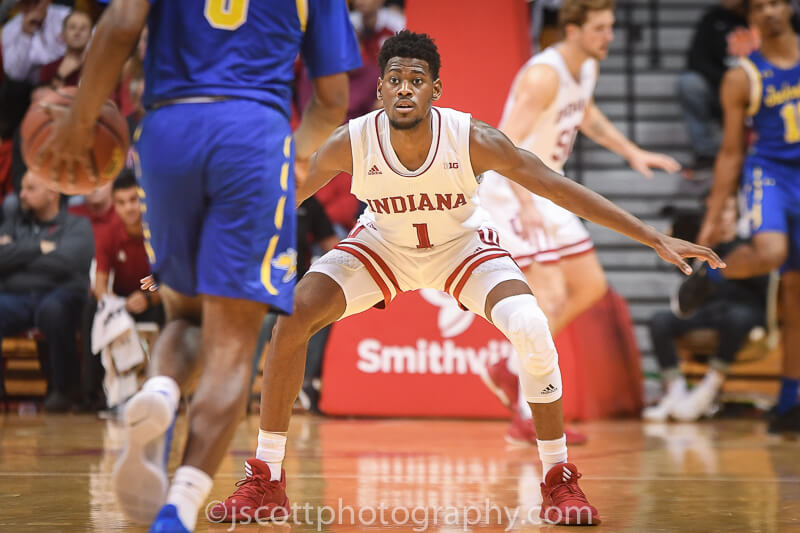 Archie Miller’s third season in Bloomington, and therefore the third season of the packline defense, brought contradictions both in the eye-test and statistically for Indiana’s defensive unit.

Some of these numbers kept pace with the rest of college basketball, as the Hoosiers have gone from 65th to 32nd to 26th in the country in adjusted efficiency under Miller, while despite the fact that effective field goal percentage for opponents dropped by 0.3 this season, Indiana went from 57th in the country in the metric last season to 101st this season.

Turnover percentage for the IU defense was also down for the third straight season, from 19.7 to 18.1 to 17.8, which placed the Hoosiers at an alarming 237th in the country this season based on the amount of times they take the ball away from opponents.

All of this is to say that while parts of the defense still lag behind others, and not all of them have consistently kept pace with other defenses in college basketball, Miller has found a way to produce a better defensive unit on the whole during each of his campaigns in Bloomington.

In 32 games this season, 11 Indiana opponents cracked the 70-point plateau, although none came in the final seven games of the season (Michigan was the last team to do so on Feb. 16).

When the games mattered the most and as the season approached postseason play, Miller’s team got stingier on that end of the court.

But it wasn’t all roses for Miller and the Hoosiers in year three of the packline.

It’s not a coincidence that Indiana began allowing less points as Race Thompson saw his minutes increase. The reliance on high-hedging placed by Miller and his staff bordered on being stubborn at times this season, in particular when Joey Brunk was on the court.

Too slow to close down on outside-shooting big men and not athletic enough to recover if they could get past him, Brunk bore the blame for plenty of breakdowns when he had to match up against versatile players. Thompson’s emergence helped erase several of these problems, but both players, along with Trayce Jackson-Davis, were able to lead a strong rebounding committee for Indiana as well.

Opponents had an offensive rebounding percentage of just 24.5 against Indiana, the 44th best among defenses in the country.

Indiana’s block percentage (the Hoosiers’ best singular defensive metric at 33rd best in the country) was undoubtedly also helped by the size on the roster. IU was top-20 in the country this season when you look at average height among players, and the 6-foot-9 Jackson-Davis averaged 1.84 blocks per game.

The other side of this coin is that when certain Indiana players, particularly Jackson-Davis in the frontcourt and a healthy Rob Phinisee (likely the team’s best on-ball defender) in the backcourt, got into foul trouble in the first half, the effect on Indiana’s defense was noticeable.

IU’s 2-foul participation (the percentage of time a starter with two fouls in the first half is allowed to play) was 11 percent, the 288th lowest in the country. It’s well-known that Miller has a quick trigger when players get two fouls in the first half, and it often came with sacrificing some of the tenacity and rebounding prowess featured in the IU defense when players who brought those qualities were taken out of games.

On the positive side though, this season served as evidence that the core packline principles have been absorbed by the majority of Indiana’s young team.

Just as was the case last season in home wins over Marquette and Michigan State, there were moments this season in which you could point to the Indiana defense playing well in games that made a difference on the team’s tournament resume.

The regular season-ending home loss to Wisconsin even featured a decent defensive job as the Hoosiers allowed 0.98 points per possession to the visiting Badgers after that number was at 1.35 for Wisconsin during Wisconsin’s home throttling of Indiana in December.

Bottom line: Miller’s Indiana teams have seen year-by-year improvements in the win column, the quality of on-court play and the end-of-year postseason projections. All of those items can be linked back to an increasingly solid defense that saw sputters with its implementation, but now success with the way it is run and the players Miller has to execute his vision for it. The Hoosiers seem prone to toss in a poor defensive effort every so often, and those come with concerning regularity on the road, but on the whole it’s a unit that is approaching the level Miller likely desired it to be at when he first took the job.

Maintaining this progress will be key moving into the future, and in turn also place some burden on the offense to progress at a similar rate. There were plenty of moments this season when it felt like Indiana’s defense was poor, but the totality of the season was another step in the right direction for the packline defense in Bloomington.

Quotable: “We are a more familiar team defensively. Now you are starting to get into those 50-50 plays, making more hard plays at the rim, competing a little bit longer in possessions, to dig down, to play through slumps and runs,” Miller said on the Jan. 20 edition of his weekly radio show. “We’ve kind of broken through that ‘Hey, we’re young,’ or ‘Hey, we are new.’ That’s not the case anymore. You are a player here now. You know what to do, and we’ve got to do it longer, better, concentrate more.”