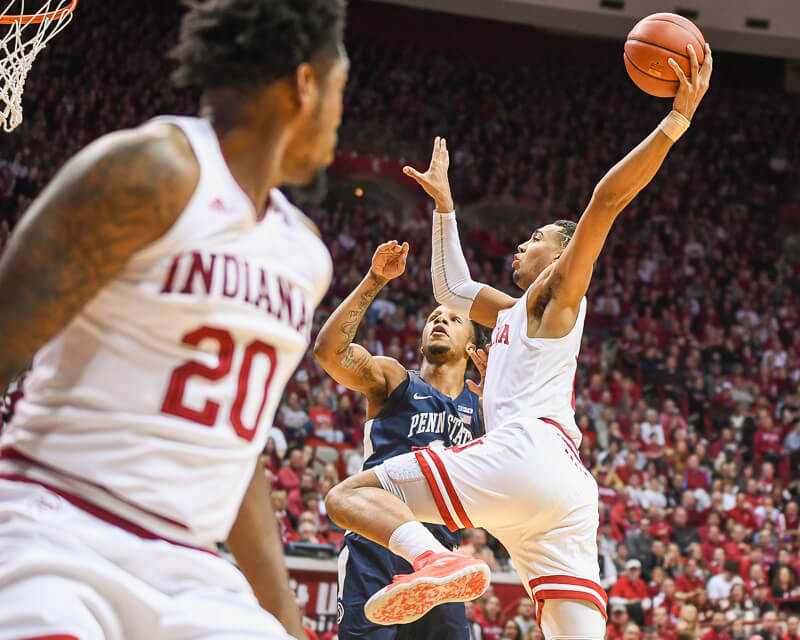 How it happened: Indiana came out hot on Sunday afternoon at Simon Skjodt Assembly Hall. The Hoosiers – on the strength of hot shooting and some questionable defense from Penn State – raced to an 18-6 lead less than eight minutes into the game. The lead ballooned all the way to 16 points at 24-8 by the 9:30 mark of the first half. And as Devonte Green went on a 3-point barrage late in the first half, Indiana went to the locker room with a comfortable 37-24 lead despite allowing Penn State to score the final six points of the period. That prosperity would be short lived for the Hoosiers. The Nittany Lions came out scoring at will in the second half and a 30-5 run in total put Penn State ahead 48-42. Indiana, however, had an answer. The Hoosiers scored the game’s next 13 points and built a seven-point lead at 55-48. From there, Penn State never got closer than three despite several turnovers and missed free throws down the stretch for the Hoosiers.

Standout performer: Trayce Jackson-Davis posted another double-double – his ninth of the season – with 13 points and 10 rebounds.

Statistic that stands out: Indiana turned in a stellar defensive effort as it allowed Penn State, which was averaging 1.046 points per possession in Big Ten play, to just .86 points per trip on Sunday afternoon.