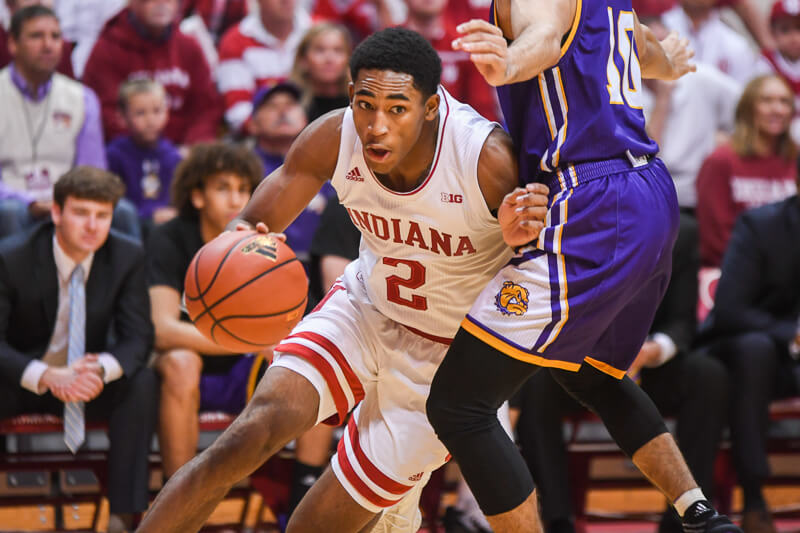 Welcome to “That’s A Wrap,” our player-by-player recap of the 2019-2020 Indiana Hoosiers. Up first: Armaan Franklin.

Armaan Franklin’s role was much bigger than anyone anticipated to begin his first season of college basketball.

Early season injuries to Rob Phinisee and Devonte Green meant that Franklin, a three-star recruit from Indianapolis Cathedral, was in the starting lineup for the season opener against Western Illinois. When Franklin committed to the Hoosiers in September of 2018, no one predicted he would be a starter for the Hoosiers just 14 months later.

Franklin scored five points, grabbed five rebounds and dished out eight assists in his IU debut and his play was stellar enough that he would remain in the starting lineup for the first nine games of the season.

His willingness to defend was a big reason that Franklin gained trust from Archie Miller, according to his aunt and former WNBA player, Coquese Washington.

“He’s established himself defensively, and it seems like he’s built a level of trust with coach (Archie) Miller that he’s able to go out there and play,” Washington told Dylan Wallace. “That’s pretty big, some freshmen aren’t able to get out there and play their first year, so the fact he’s out there and in the rotation I’m very happy for him.”

After Indiana fell 84-64 at Wisconsin on Dec. 7 in the team’s Big Ten opener, Franklin would shift to a a reserve role and his minutes diminished significantly. After logging 20 or more minutes over eight of Indiana’s first nine games, Franklin hit the 20-min mark just three times over the season’s final 23 games.

Despite shifting to a role as a reserve, Franklin would still have a major impact at times for Archie Miller. The most notable moment from his freshman season came in Indianapolis against Notre Dame at Bankers Life Fieldhouse in the Crossroads Classic. In just 14 minutes, Franklin splashed in four 3-pointers (a season-high) and made several key plays down the stretch in a narrow 62-60 victory.

Trailing by five with three minutes remaining, Franklin hit a 3-pointer to cut the Fighting Irish lead to two. He also took a charge and dished out an assist in the game’s final minutes, but it was his decisive 3-pointer that Indiana fans will remember most. With Notre Dame leading by one, Franklin took a pass from Al Durham Jr. in the left corner and nailed a 3-pointer with 15 seconds remaining to lift IU to victory.

Franklin also played well in subsequent games against Nebraska, scoring eight points in an 82-74 win in Lincoln on Jan. 18 and 13 points against the Cornhuskers in the Big Ten tournament last week in Indianapolis.

In terms of efficiency, Franklin struggled with his perimeter shot for the majority of his freshman season. Overall, he shot just 17-for-64 on 3s (26.6 percent) and in Big Ten play, he was just 6-of-29 (20.7). In particular, Franklin struggled in spot-up situations as he scored just 38 points in 56 such possessions (.679 PPP) according to Synergy Sports. He wasn’t much better inside the arc (45.8 percent) or from the free throw line (61.5 percent), either.

Still, the valuable experience Franklin gained make him an important rotation piece for Miller and the Hoosiers moving forward. While he may never be a featured scorer or even a starter depending on how recruiting goes in Bloomington, he can still be a valuable four-year player who contributes to winning.

Bottom Line: Franklin played in all 32 of Indiana’s games as a freshman, making nine starts and numerous contributions to a 20-win season. His heroics in Indianapolis saved the Hoosiers from what would have been a stunning loss to Notre Dame and his ability to step in from day one and play major minutes in the absence of Green and Phinisee was impressive. This offseason will be big for Franklin as he’s going to have to earn every minute of playing time next season with the arrivals of Trey Galloway, Anthony Leal and potentially, Khristian Lander.

Quotable: “I don’t want to say a timid personality, but he’s reserved, he’s quiet on the court. I think he’s a vibrant kid, so if he has the ability to show some of that vibrance on the floor a little bit more, I think it would be infectious. We’ve tried to encourage him to do that, and I think he’s done that. He’s gotten better defensively.

“As a young player you’re out there sometimes and you’re at the mercy of the other coaches trying to go at you. He’s been able to answer the bell for us a few times defensively for us, but I just think he has a real calm, smooth approach offensively. He knows how to play the game. He makes solid, sound plays, and he’s not afraid, and I think as he’s gotten a little bit older, the bigger the lights of the game, the more he’s been able to step up, whether it was at Florida State, made huge plays down the stretch of that one, or whether it was this one, or even finishing the other night.” – Miller on Franklin after IU’s win over Notre Dame in the Crossroads Classic. 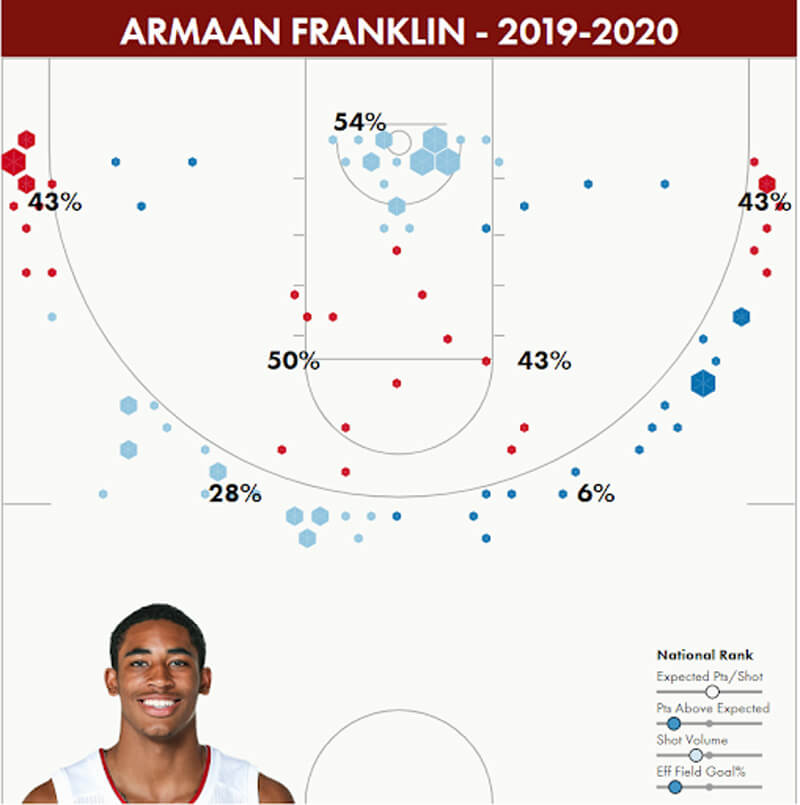