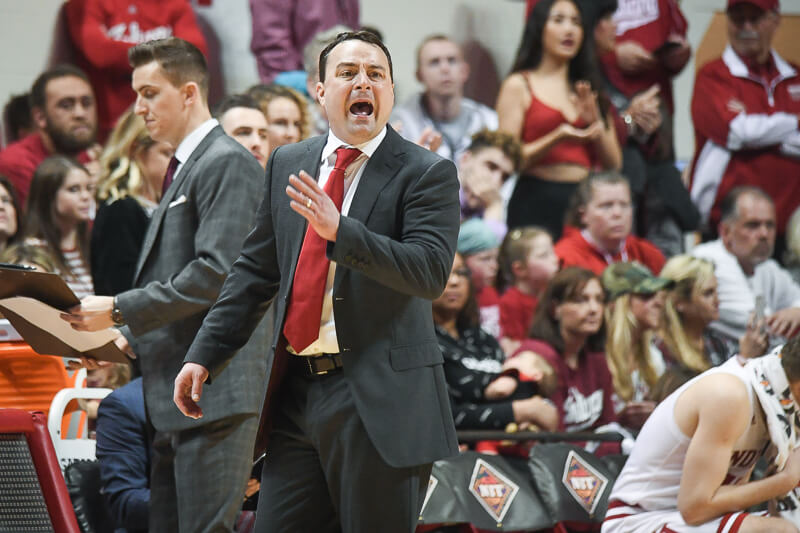 Between recruiting news, offseason analysis, and decisions with future implications for the program, hardly a day goes by this time of year without an IU-related headline to devour.

Indiana is in the midst of a significant personnel turnover, with much of its identity still to be figured out. In addition to losing graduating seniors, Romeo Langford will likely depart for the NBA while Devonte Green considers doing the same, and several players have already transferred. Archie Miller will have new faces in his rotation next season, though exactly which ones and how many has yet to be decided.

These past few days were busy ones on the Indiana recruiting scene, and the weeks to come figure to be no different. Tuesday afternoon, Joey Brunk announced his transfer from Butler to Indiana. After spending three seasons as a Bulldog, the Indianapolis native has two remaining years of eligibility and figures to factor prominently in the IU rotation.

On Monday, 2019 target Trendon Watford, brother of former IU star Christian Watford, postponed his college decision date in light of the Jordan Brand Classic not being televised. Watford, a 6-foot-9 forward from Birmingham, AL, is a consensus top-30 recruit and a potential difference maker as a freshman, regardless of where he goes. He is deciding between Alabama, Indiana, LSU, and Memphis.

Lester Quinones, a 2019 guard from Florida, will announce his decision on May 10th, per his personal Twitter account. At 6-foot-5, Quinones is a capable shooter and ball-handler, with the tools to defend multiple positions at the college level if he adds weight. LSU, Memphis, Maryland, and Michigan are also in the running for the IMG Academy product.

Anthony Harris, meanwhile, took a visit to Bloomington on Saturday. The former Virginia Tech commit reopened his recruitment after Buzz Williams was hired at Texas A&M. He has another visit scheduled to North Carolina and has not announced when he will make a final decision on which school to attend.

Matthew Hurt, one of the top players in his class and a one-time IU target, committed to Duke this week, making him the second top-10 2019 recruit to join the Blue Devils’ 2020 roster.

Dustin Dopirak, IU-Purdue-Butler beat writer for The Athletic, joined Podcast on the Brink this week to discuss Brunk’s commitment to the program, how the transfer will fit with De’Ron Davis and Trayce Jackson-Davis, and how he might impact IU’s culture.

Then, Brunk himself joined the POTB crew to discuss his transfer and the IU program before Jerod Morris & Alex Bozich answered reader mailbag questions.

You can subscribe to every episode of Podcast on the Brink here to keep up with everything IU hoops-related.

Inside the Hall player wrap-ups

Inside the Hall concluded its player wrap-up series this week with a final examination of Juwan Morgan and what made the senior such an integral piece of the program for the last four years. Still to come are the final look at the team’s offense and defense, as well as an assessment of Archie Miller’s 2019 season.

The Big Ten released its 2020 conference schedule on Wednesday. Indiana will play Purdue, Maryland, Minnesota, Nebraska, Ohio State, Penn State, and Wisconsin at home and away, while taking on Iowa, Michigan State, and Northwestern at Assembly Hall. Road-only opponents include Illinois, Michigan, and Rutgers.

All things considered, the Hoosiers received a fairly favorable draw, avoiding Breslin Center and Carver Hawkeye Arena. Dates and times for the games have yet to be announced.

Hoosiers in the NBA: Playoffs Edition

Only two Hoosiers will compete in this year’s NBA Playoffs, and that list could be trimmed to just one depending on when the Toronto Raptors are eliminated. OG Anunoby underwent an emergency appendectomy on April 11, just days before the start of the playoffs. A timetable for return has not been announced, but the Raptors will likely need Anunoby’s size and defensive versatility to mount a serious threat against the Milwaukee Bucks or Golden State Warriors. This is another unfortunate chapter in the second-year forward’s star-crossed season, which has included his father’s death, a host of minor maladies, and, understandably, a dropoff in his play.

Eric Gordon has been sharp in the Rockets’ first two games of the playoffs – two blowouts of the Utah Jazz – averaging 16.5 points and 1.5 blocks on a blistering 54.5 percent shooting from three. Gordon spent the final few weeks of the regular season rounding into form, and if he plays at his peak in the postseason, Houston may be nearly as viable a threat to Golden State as it was last season.

Victor Oladipo, tragically, will not take part in these playoffs, a fact that has manifest painfully in the Pacers’ three contests against the Boston Celtics. Indiana has next to no shot creation without Oladipo, and while its defense has been stingy, so much has been thrust onto Bojan Bogdanovic’s shoulders as to weigh down the entire offense.

Noah Vonleh and Thomas Bryant both missed the playoffs by a long shot, but the two bigs made solid cases for themselves in free agency this summer. Vonleh finished the season with averages of 8.4 points, 7.8 rebounds, and 1.9 assists on 53.1 effective field goal percentage — all career highs. Bryant, meanwhile, averaged 10.5 points and 6.3 rebounds while leading the entire league in two-point field goal percentage in his second season. Neither will make starter-level money this summer, but both helped themselves immensely in contract years.

All stats current through April 19.

It was a huge week for sports as teams across the IU spectrum competed. Assembly Call covered 2 of these events, and many others were in action as well — with no less than 11 sports were in action across Hoosier Nation this week.