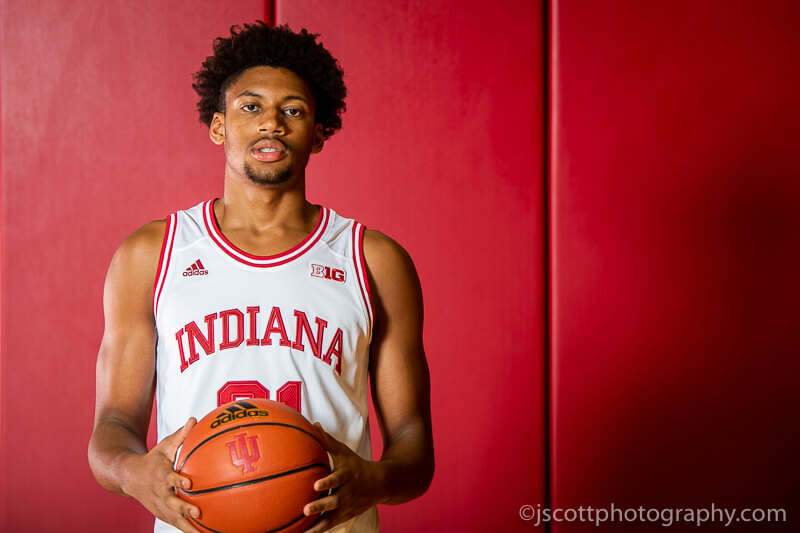 Winning a commitment from Hunter was a big deal for Miller and the IU coaching staff as Big Ten rivals Ohio State and Michigan were also heavily involved with the four-star forward.

The 6-foot-7 forward from Pickerington North looked like a sure bet to crack the Indiana rotation as a freshman because of his ability to play multiple positions and also stretch the floor as a shooter.

In fact, Hunter was one of the first Hoosiers to earn the coveted practice “gold jersey” last fall in practice. After Juwan Morgan won the jersey the first two weeks of practice and Romeo Langford earned it in week three, Hunter claimed it during week four of practice for “making a lot of shots,” according to Archie Miller.

Unfortunately for Hunter and the Hoosiers, the only time he suited up as a freshman on Branch McCracken Court was for the Hoosier Hysteria scrimmage in late September. Shortly after earning the gold jersey in late October, Hunter was shut down with an injury.

According to a release from IU on Nov. 15, Hunter “underwent surgery at the Cleveland Clinic to treat a lower body condition that first developed early in the semester.”

Subsequent updates throughout the season from Miller only reiterated the tough reality for Hunter and IU: the former four-star forward was out indefinitely and would not play as a freshman.

Citing HIPPA laws, Indiana has not disclosed the specifics of Hunter’s injury or details on if or when he might be able to play again. Hunter’s availability for next season remains a question mark, but is quite pivotal for the coaching staff to get a grasp on before finalizing the roster for next fall.

If Hunter is able to compete at 100 percent health, he’s a likely starter and a major piece to the puzzle. If he’s not able to play, Indiana may be forced to look for help on the recruiting trail to provide additional shooting and scoring punch given that Juwan Morgan and Romeo Langford are both gone.

Bottom line: Hunter’s status is one of the biggest offseason storylines for IU basketball. While the details of his injury remain murky, the fact that the setback has been described as a “condition” and that it required a trip to the Cleveland Clinic for surgery suggests that it is not a common basketball injury. Having him available next season would provide a major boost on a roster that is losing its two most talented players.

Quotable:  “Jerome loves the game of basketball, more than any guy that I’ve probably been around in a long time. He can’t get enough of the gym, which is a great sign as a young player. It’s a great sign, an attribute to deal with me or our staff. You’ve got to love the game. Jerome loves basketball. He is 6’7″, probably 210, 212 pounds as a freshman. He’s got to get bigger and stronger. He’s going to develop from that combo forward to more of a wing perimeter-oriented guy, which that’s a tough change in terms of ball handling and guarding smaller players. So he’s going to go through a bunch of that, but he has as much upside and talent as any guy that we’ve got, and I think within time here, he can develop into a terrific Big Ten player, all-conference type player in his time. He’s a much better three-point shooter than I ever imagined he would be coming in.” – Miller on Hunter at last fall’s media day.