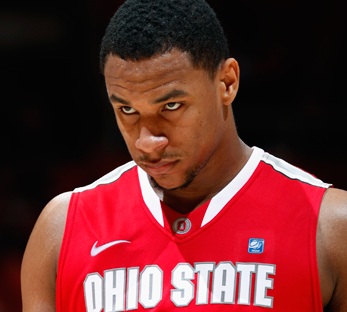 With the college basketball season inching closer, we’ll be taking a long look at the conference at large as well as Indiana’s roster over the next few weeks. Today, we wrap up our Big Ten team previews with a look at the Ohio State Buckeyes.

In four of Thad Matta’s seven seasons in Columbus, Ohio, his Buckeyes have claimed a Big Ten championship. And as the 2011-12 campaign approaches, a fifth is well within sight.

It all starts with Jared Sullinger. The sophomore big man opted to forego the NBA draft in June — one in which he was a surefire Top 5 pick — in order to remain a Buckeye for another season. Some viewed this as the wrong move. You take the money when you can. But with the lockout still looming over the NBA and Sullinger reportedly working his game and body to be more ready to take on the 4-spot in the pros, maybe he got it right.

The Columbus native was a force in the paint last season in a number of ways. He scored (17.1 points per game), got to the line (65.1 percent free-throw rate) and rebounded (both his offensive and defensive rebounding percentages ranked second in the conference). And his 2010-11 comaparables via Ken Pomeroy are impressive: Kevin Love (’08), Tyler Hansbrough (’06), Blake Griffin (’08) and Greg Oden (’07).

But like many Matta teams, Sullinger isn’t the only talent. We previously profiled sophomore Deshaun Thomas as a potential breakout candidate. With David Lighty and John Diebler gone, Thomas figures to take on a larger role for the Buckeyes. Senior William Buford, who started 34 games in 2010-11 and was the team’s second-leading scorer (14.4 points per game) behind Sullinger, will provide experience and yet another strong option for the Buckeyes’ offense.

Aaron Craft, a solid PG reserve a season ago as a freshman, returns with a strong assist rate (26.5 percent, 183rd best in the nation) and steal percentage (4.1 percent, 33rd in nation) to his name and figures to start at point. Craft, along with Thomas and Sullinger, was also named to the Wooden Award Watch List. Sophomore Jordan Sibert also figures to take on a larger role for the team this season, while Matta has a host of talented incoming freshman. Center Amir Williams (Rivals No. 77), wing Sam Thompson (Rivals No. 50) and point guard Shannon Scott (Rivals No. 53) figure to give the Buckeyes a boost.

Bottom line: Ohio State won’t only be the favorite to win a the Big Ten championship, but they also figure to be on the short list of national championship contenders in 2011-12.

Quotable: “I think the Buckeyes will be best served by playing as big as possible, with Craft at the point, William Buford at the 2, Deshaun Thomas at the 3, Jared Sullinger at the 4 and freshman Amir Williams at center. That’s a big lineup but one that can run the floor and score in a variety of ways. It may not be quite as dynamic as last season’s team, and the defensive end of the floor may be a struggle at times, but boy, is that a talented group.” — ESPN’s Eamonn Brennan