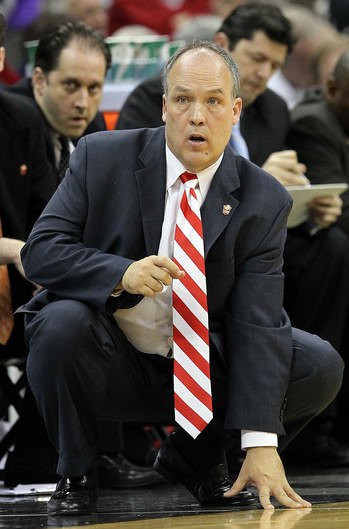 With the college basketball season inching closer, we’ll be taking a long look at the conference at large as well as Indiana’s roster over the next few weeks. Today, we continue our team previews with a look at the Nebraska Cornhuskers.

Get used to it.

The Cornhuskers are now a part of the expanded Big Ten.

Departed senior point guard Lance Jeter led the squad — averaging the most points (11.7) and minutes (30.2). He was also one of their more efficient shooters (53.1 effective field-goal percentage) and racked up more assists (279) than any other two-year player in school history. Eshaunte Jones, a reserve guard and one-time IU recruit, has transferred to Northern Kentucky. Despite losing both, the Cornhuskers still boast plenty of experienced upperclassmen talent from last year’s squad. Junior center Jorge Brian Diaz will anchor the middle. Diaz sported a block percentage of 5.7 last season — good for 146th in the nation — so he’s a solid rim protector. He was also second in scoring (10.5) and minutes (26.3) for the Cornhuskers.

Senior guards Brandon Richardson (fifth in scoring, third in minutes), Toney McCray (third in scoring, fourth in minutes) and Caleb Walker (seventh in scoring, fifth in minutes) will all return and Ray Gallegos (junior) will provide backcourt depth. Up front, forward Brandon Ubel, who was sixth in both points and minutes, is back. Senior center Andre Almeida stands at 6-foot-11 and will give the Cornhuskers some nice size to spell Diaz.

One last note: Nebraska also has a new practice facility debuting this fall, which along with the school’s addition to the Big Ten, could help recruiting.

Bottom Line: Though Nebraska is traditionally thought of as a football school, the Cornhuskers come into basketball season with an experienced squad that shouldn’t be taken lightly. The Hoosiers could have their hands full in their only bout with them — a January 18 matchup in Lincoln.

Quotable: “Gotta get up early for these workouts its almost here can’t wait we gonna open up a lot of people eyes #ball game” — A Sunday tweet from @killacity25 (Walker’s Twitter username)