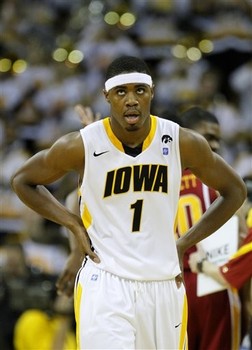 With the college basketball season inching closer, we’ll be taking a long look at the conference at large as well as Indiana’s roster over the next few weeks. Today, we continue our team previews with a look at the Iowa Hawkeyes.

A new era began last winter in Iowa City as Fran McCaffery was tasked with turning around a program run into the Big Ten cellar by Todd Lickliter.

As most pundits predicted, it was a tough debut season for McCaffery and the Hawkeyes: Iowa finished 11-20 overall and 4-14 in the conference.

But even in the midst of a major rebuilding overhaul, there were positive signs in year one of the McCaffery era. Iowa avoided finishing last in the league by beating Indiana twice and Michigan State and Purdue at home. Three of their conference losses were by just three points, including two in overtime. And guard Bryce Cartwright and big man Melsahn Basabe quietly put together stellar seasons.

Add it all up and the Hawkeyes could be a surprise in a league with plenty of question marks outside of the top three teams.

Iowa returns four of five starters, but will miss the departed Jarryd Cole, who ranked in the top 10 in the league in both offensive and defensive rebounding percentage. Basabe, who landed on the conference All-Freshman team, was also in the top 10 in both of the aforementioned categories. A quick glance at the comparables for his 2011-2012 season brings back a couple of first round NBA Draft picks in Derrick Favors and B.J. Mullens.

The 6-foot-1 Cartwright, who ranked second in the Big Ten in assist rate, will anchor the backcourt. Matt Gatens, who led the team in scoring at 12.6 points per game, also led the conference in free throw percentage (87.4). Other returnees in the backcourt include Eric May (7.8 ppg), Zach McCabe (5.8 ppg) and Devyn Marble (5.7). Newcomer Josh Oglesby, a Top 150 shooting guard, should also enter the rotation.

If the Hawkeyes are to take a significant leap forward this winter, an improved team offense will be pivotal. In conference games, Iowa ranked last in offensive efficiency, last in turnover percentage, tenth in 3-point shooting percentage and ninth in free throw percentage.

Bottom Line: McCaffery is moving the program in a positive direction both on the court and in recruiting. His 2012 class already includes Adam Woodbury, a 7-footer from Sioux City that chose Iowa over North Carolina earlier this month, and Mike Gessell, a top 75 point guard. The Hawkeyes will still take their lumps against the league’s top teams, but should be improved across the board.

Quotable: “Everybody talks about building a program, where we’re going to be in three to five years… I want to be good this year.” – McCaffery after a team-building exercise called “The Program” earlier this month.