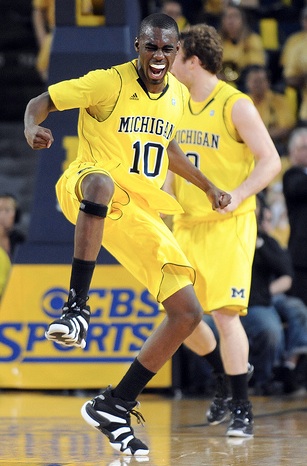 With the college basketball season inching closer, we’ll be taking a long look at the conference at large as well as Indiana’s roster over the next few weeks. Today, we continue our team previews with a look at the Michigan Wolverines.

As noted yesterday, the Michigan State Spartans failed to live up to expectations in 2010-11. But their in-state rivals — the Michigan Wolverines? John Beilein’s boys smashed through theirs.

Without much of a veteran presence on the squad and expected to finish near the bottom of the league, Michigan surprised last season by not only making it to the NCAA Tournament, but by nearly advancing to the Sweet Sixteen. As a No. 8 seed,  the Wolverines destroyed Tennessee in the first round of the tournament (75-45) before narrowly losing to top-seeded Duke (73-71), as a Darius Morris shot to tie the game in the closing seconds missed.

The sophomore point guard was a big part of Michigan’s unexpected charge. Morris was as skilled a dime-dropper as almost anyone in the nation last season with an assist rate of 44.2 percent (third-best in the country). But based on his breakout season, Morris entered the NBA draft and was selected by Los Angeles Lakers with the No. 41 pick in the second round.

Even with Morris’ departure, Michigan still boasts a strong cast of characters, ones that figure to establish themselves among the upper echelon of the conference. And if things fall into place, the team could challenge Ohio State and Wisconsin for a Big Ten championship this season.

Sophomore guard Tim Hardaway Jr. — who we previously profiled as a member of our preseason All-Big Ten team — is a nice fallback option for the departed Morris and should emerge as the team’s leading scorer. Seniors Stu Douglass and Zack Novak will provide experience so often needed during the Big Ten slate and were among the better 3-point shooters on the team last season. Three sophomores — forwards Jordan Morgan, Evan Smotrycz and Jon Horford — will anchor the team’s frontline. As a freshman, Morgan was the team’s top offensive rebounder (10.7 offensive rebounding percentage) and was second to Novak (17.4) in defensive rebounding percentage (16.8).

Bottom line: With veterans Douglass and Novak and a host of talented underclassmen, Michigan has an intriguing mix of players heading into the season. How high they finish in the conference may depend on whether they can find proper chemistry void of Morris’ facilitation skills.

Quotable: “I don’t believe Zack will have his jersey retired at Michigan, but he’s had a tremendous impact on the rebuilding and remodeling of Michigan basketball. He’s as good as it gets as far as knowing how to encourage a team without berating them. And then he goes out and does it. You’re not an effective leader if you’re talking about taking charges and you don’t take them or if you’re talking about playing hard or going to class and you don’t do it. He does it.” — Beilien speaking about Novak to Yahoo! Sports.