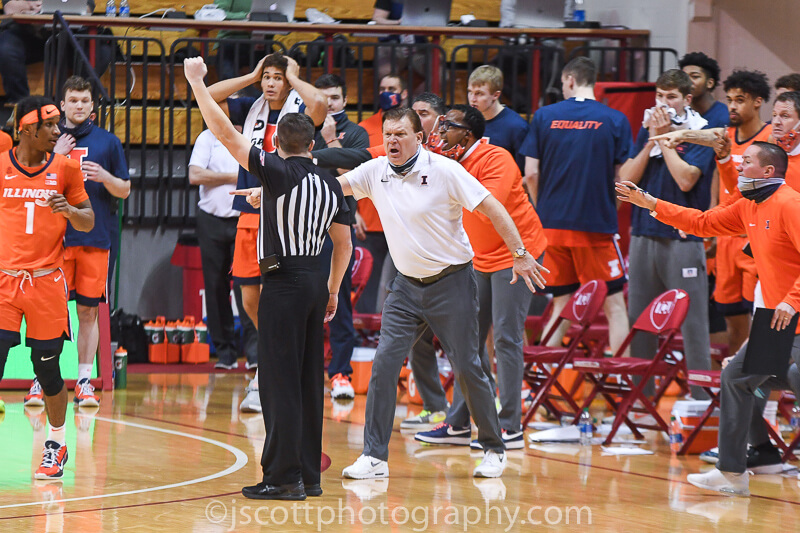 With the start of college basketball season coming in early November, we’ll be taking a long look at the conference at large as well as Indiana’s roster over the next month. Today, our team previews continue with a look at Illinois.

Despite a disappointing NCAA tournament loss to Loyola, Illinois is coming off a brilliant 2020-21 campaign.

The Illini finished the regular season 20-6, won the Big Ten tournament and earned a No. 1 seed in March Madness. This year’s Illinois roster will look different without Ayo Dosunmu, the league’s best closer in tight games.

Off the court, Illinois also had to navigate some key changes to its coaching staff. Assistants Chin Coleman and Orlando Antigua departed for Kentucky. How those departures impact the program’s recruiting long term is a legitimate question Brad Underwood will have to answer.

The headliner is center Kofi Cockburn, who was named the Big Ten preseason player of the year by the league’s media. The Bahamian center averaged 17.7 points, 9.5 rebounds and 1.3 blocks as a sophomore.

He was second in the Big Ten in offensive rebounding percentage, fourth in defensive rebounding percentage, and made 66.4 percent of his 2s in Big Ten play, which led the league. The improvement in finishing showed just how much of a leap Cockburn made from his first season when he made only 49.1 percent of his 2s in league play.

Cockburn will form one of the league’s best duos with sophomore Andre Curbelo. He led the Big Ten with a 38.9 assist rate in conference games. Curbelo created more points per game out of ball screens (8.2) than any other returning player in the Big Ten, per Synergy Sports.

Trent Frazier and Da’Monte Williams both opted to return for their “super senior” seasons in Champaign and will join Curbelo in the backcourt.

A career 36 percent 3-point shooter, Frazier is also a force defensively. Frazier was named to the Big Ten’s all-defensive team last season and was ninth in the conference in steal percentage. Williams, meanwhile, shot a ridiculous 54.7 percent on 3s last season. Williams should be surrounded by enough talent that open looks will continue to be plentiful in his final season.

Jacob Grandison will likely start at the four for the Illini. He averaged 4.6 points, 3.4 rebounds and shot 41.5 percent from 3 last season.

A pair of key transfers, Omar Payne (Florida) and Alfonso Plummer (Utah), will figure into the rotation off the bench. Plummer averaged 13.6 points for the Utes last season. The 6-foot-1 guard is a career 39.9 percent 3-point shooter. He should help replace some of the scoring vacated by Dosunmu and Adam Miller, who transferred to LSU.

Payne, meanwhile, is a 6-foot-10 forward who Underwood seems high on. Payne averaged 3.8 points and 3.2 rebounds last season for the Gators.

“Omar has been tremendous throughout the summer, throughout our first couple weeks of fall practice,” Underwood said recently. “Omar is an elite athlete. He’s a guy that we have not had at 6-foot-10. He has a 7-foot-5 wingspan. Not knowing what Kofi’s status was going to be, we knew we had to have a guy capable of playing in ball screens with Curbelo and Trent Frazier.”

Bottom Line: Illinois has a high floor with the return of Cockburn for his junior season. He’s got first team All-American talent and should be looking to use this season to show he belongs at the next level. The ultimate ceiling for this team, however, rests with Curbelo. He’s capable of emerging as the Big Ten’s best point guards. Curbelo must cut down on his turnovers, but he’s an elite player in ball screen situations. Having Frazier and Williams back to provide shooting on the wings will provide plenty of room for Curbelo and Cockburn to operate. While Michigan and Purdue are being picked by many to win the league, Illinois has the talent to compete for the Big Ten title.

Quotable: “We’re excited about our group this year. Obviously, that starts with the return of Kofi Cockburn deciding to come back. He’s a guy that we think is a candidate for national player of the year. Then more importantly a couple of guys, Da’Monte Williams and Trent Frazier, two guys who elected to come back for their super senior years. We’re excited. We’re looking forward to that.” – Underwood at Big Ten media day earlier this month.