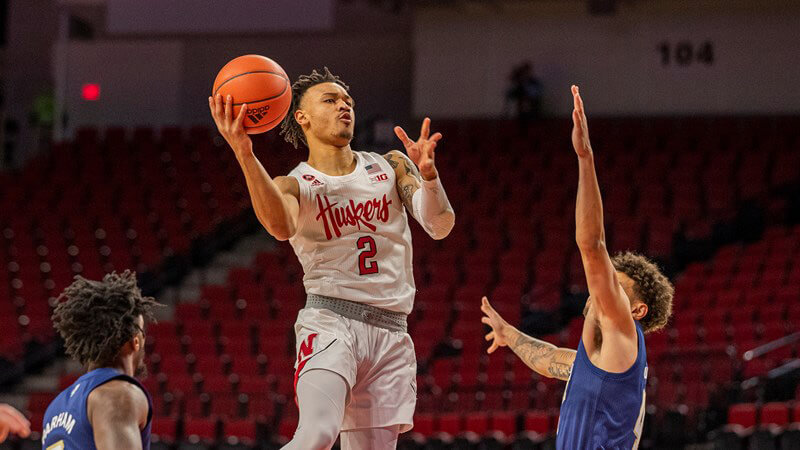 With the start of college basketball season coming in early November, we’ll be taking a long look at the conference at large as well as Indiana’s roster over the next month. Today, our team previews continue with a look at Nebraska.

Year three of the Fred Hoiberg era could mark the beginning of a turnaround for Nebraska basketball.

Hoiberg, hired in the spring of 2019, has compiled just a 14-45 record over his first two seasons in Lincoln. But a strong recruiting haul this offseason has Nebraska poised to climb out of the Big Ten cellar.

The Cornhuskers return only one double-figure scorer from last year’s team in Trey McGowens, but are welcoming a five-star freshman and several transfers capable of making an impact. Nebraska’s recruiting class in 2021 was ranked in the top 20 by most of the national services.

He’ll have help in the backcourt this season as his brother Bryce, a five-star player according to the 247Composite, joins him on the roster. The 6-foot-6 wing should provide an immediate scoring punch in Hoiberg’s third season. McGowens was the Gatorade Player of the Year in South Carolina last season.

“I believe that signing Bryce changes the whole trajectory of our program,” Hoiberg said last winter. “He is the centerpiece of what I believe is the strongest class that Nebraska basketball has ever signed. Since I’ve been here, we have talked about building a program that can have sustained success, and adding a player of Bryce’s caliber shows that we’re building something special here.”

After Dalano Banton opted to turn pro, Hoiberg dipped into the transfer portal and landed Arizona State’s Alonzo Verge Jr. A high usage, low-efficiency guard, Verge averaged 14 points last season for the Sun Devils to go along with 3.9 rebounds and 3.8 assists per game. He’ll likely get the first crack at the starting point guard job. Verge was the PAC-12 sixth man of the year back in the 2019-20 season.

Keon Edwards was a top 80 recruit who enrolled midway through last season and played at DePaul before transferring to Nebraska last spring. He’ll bring athleticism, size and versatility to what should be a deep wing and guard rotation.

Guard Kobe Webster, an Indianapolis native, returns after averaging 8.1 points last season and appearing in all 27 games. C.J. Wilcher, a transfer from Xavier, will challenge for rotation minutes behind the McGowens brothers. Wilcher averaged 3.3 points per game last season for the Musketeers.

Up front, forwards Lat Mayen and Derrick Walker return and are the likely starters at the four and the five.

Mayen can stretch the floor at 6-foot-9 and made 48 3-pointers last season. Walker, who began his career at Tennessee, became eligible in early January last season. In 16 games, Walker shot 60 percent from the field and averaged 5.9 points and 4.8 rebounds per game.

Freshman Wilhelm Breidenbach is a top 100 recruit from Santa Ana, California who will likely compete for minutes at the four and the five. Breidenbach was a major recruiting win for Hoiberg as he chose the Huskers over USC, Cal, Vanderbilt and several others.

Forward Trevor Lakes, who transferred from Division II Indianapolis in 2020, averaged close to five points over Nebraska’s final four games last season. Known as a shooter at Indianapolis, the 6-foot-7 Lakes made just 25.8 percent of his triples last season in Lincoln.

Bottom Line: While Nebraska lost two key contributors from last season in Banton and Teddy Allen, this year’s roster should be more balanced offensively and the talent level overall has improved. Breidenbach and Edwards were both top 100 recruits out of high school and Bryce McGowens is the highest-rated recruit in program history. Assuming Verge can handle the point guard duties with Webster as the backup, the strength of Nebraska’s team should be in the backcourt. The McGowens brothers will bring a 1-2 scoring punch and the talent off the bench is much improved over Hoiberg’s first two seasons.

Quotable: “We have things we can build on. We’ve got a great recruiting class I know we’ve talked a lot about coming in. So, you know, even though it ended in a disappointing night. I love our future. I think it’s very bright and can’t wait to get back to work.” – Hoiberg after last season’s loss to Penn State in the Big Ten tournament in Indianapolis.