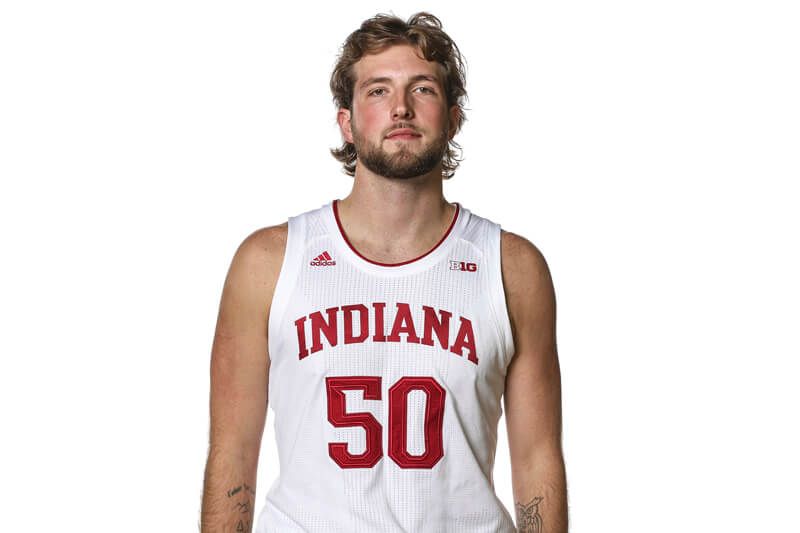 With the start of college basketball season scheduled for later this month, we’ve transitioned from our look at other Big Ten programs to our player-by-player previews of the 2020-21 Indiana roster. Today, our player profiles continue with a look at redshirt senior Joey Brunk.

Indiana’s leadership both on and off the court received a boost last season with the addition of Joey Brunk.

The 6-foot-11 center, who began his prep career at Park Tudor and finished it at Southport, played his first three collegiate seasons at Butler.

But following the 2018-2019 season with the Bulldogs, Brunk decided he was ready to move on and Indiana moved quickly to secure his commitment in the spring of 2019.

It didn’t take long for Brunk to make his impact felt in Bloomington.

He won the offseason champion award in the summer of 2019 for his work in the weight room. And when the season tipped off, Brunk was in Indiana’s starting lineup, a spot he would go on to occupy for 31 of the team’s 32 games.

From a statistical perspective, Brunk’s impact for the Hoosiers was mixed. He averaged a modest 6.8 points per game while pulling down 5.2 rebounds in 19.6 minutes per game. His field goal percentage (52.2) took a major dip from his final season at Butler, when he made 62.3 percent of his 2s and was one of the nation’s best finishers at the basket.

Despite the ups and downs, Brunk had plenty of key moments that contributed to pivotal Indiana wins last season. His nine points against UConn in the Jimmy V Classic helped the Hoosiers overcome a putrid offensive performance to grind out a 57-54 win. He tied a season-high with 16 points in a key 82-74 road win at Nebraska on Jan. 18 and followed that up with 14 points and six rebounds in a win over Michigan State on Jan. 23.

After that win over the Spartans, Brunk scored in double figures just once in the team’s 13 games and there were three games in which he didn’t score at all. But despite the rough ending to the season and several occasions in which he was benched in favor of Race Thompson, Brunk’s demeanor remained unchanged.

“Just got to stick with it regardless of what is going on,” Brunk said following a win over Minnesota in early March. “Continuing to lead in practice, have energy, keep plugging away.”

As a redshirt senior, Indiana will once again rely on Brunk to lead on and off the floor. Last month, he was named one of Indiana’s four captains for this season and it’s likely that he’ll be in the mix to start for the Hoosiers this winter.

Brunk’s spot in the starting lineup was a point of contention for some Hoosier fans last winter, but Archie Miller was steadfast in his support to start Brunk and cited how hard he plays as a major reason.

“You’re in March. If you change your starting lineup, you change your starting lineup with a specific reason or a specific adjustment. I’ll tell you this much, the minute you change, you lose guys,” Miller said following that aforementioned win over Minnesota. “There’s no reason to do that. Part of it is I think what Joey did tonight, you hang in there, hang in there. It’s not easy to play well every night, but it’s easy to play hard every night. I think Joe played extremely hard tonight.”

Bottom Line: Brunk will once again be a major player in Indiana’s frontcourt rotation, but his minutes will fluctuate based on matchups. If Indiana goes with smaller lineups more frequently, it’s likely that Trayce Jackson-Davis could spend some time at the five and push Brunk to the bench. And a strong offseason from Race Thompson figures to put him into position to take on a more significant role as well. Still, Brunk’s experience, ability to finish at the rim and his grit will once again make him a rotation stalwart for Miller and the Hoosiers.

Quotable: “My dad, I think he’s watching every game. I know, I’m sure he’s watching tonight. I think about him nightly, so it’s not like tonight…is anything out of the norm.” – Brunk after last season’s win over UConn in the Jimmy V Classic speaking about his father, Joe Brunk, who passed away following a battle with cancer in the spring of 2017.