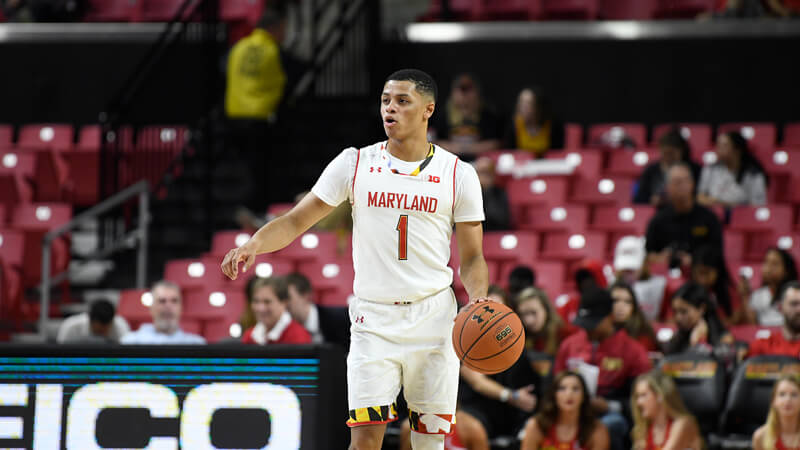 With the start of college basketball season on the horizon, we’ll be taking a long look at the conference at large as well as Indiana’s roster over the next month. Today, our Big Ten team previews continue with a look at Maryland.

If there’s a Big Ten team with the talent on paper to challenge Michigan State for the the league championship, it might be Maryland.

The Terps return seven of their top eight players from last season’s team that won 23 games, including 13 in league play, and advanced to the NCAA tournament’s round of 32.

The headlining returnees are senior point guard Anthony Cowan and sophomore forward Jalen Smith, who might be the best NBA prospect in the conference.

The 6-foot Cowan averaged 16.6 points, 4.4 assists and 3.7 rebounds and was fifth in minutes played in the Big Ten last season. His 3-point shooting is erratic, but Cowan is effective off the dribble and can get into the lane and draw fouls. He ranked in the top 20 of the league in free throw rate (FTA/FGA) as a junior and shot 80.6 percent from the line. Cowan was recently recognized as a preseason all-conference selection in the official unofficial Big Ten media poll.

Smith is one of the most unique players in college basketball because of his size and versatility. While it was a surprise that he didn’t test the NBA waters last spring, his return is a major boost for the talent level of the conference. At 6-foot-10 and 225 pounds, the former McDonald’s All-American is capable of stepping outside and is also an elite finisher in the paint. He averaged 11.7 points and 6.8 rebounds as a freshman and with Bruno Fernando now in the NBA, Smith will be the primary option for Mark Turgeon in the frontcourt.

Maryland’s biggest question mark might be who joins Smith in the frontcourt rotation. Sophomore Ricky Lindo Jr. returns after averaging 1.6 points and 3.5 rebounds last season and junior Joshua Tomaic, who played sparingly last season, also returns. The 2020 recruiting class has a trio of bigs in 6-foot-9 twins Makhel and Makhi Mitchell and 7-foot-2 center Chol Marial, who had surgery last month and is expected to miss three to four months. That’s no shortage of size, but it will be up to Turgeon to figure out who fits best next to Smith.

The backcourt rotation is far more established as sophomores Eric Ayala, Aaron Wiggins and Serrel Smith Jr. are all back along with junior Darryl Morsell.

Ayala started 33 of Maryland’s 34 games last season and shot 40.6 percent on 3s. Morsell is a very good defender and shot 51.7 percent on 2s as a sophomore. Wiggins is a potential breakout candidate after averaging 8.3 points on 41.3 percent shooting off the bench last season. Freshman Donta Scott, who is 6-foot-6, a top 150 recruit in the 247Composite, could get some time at the three or the four.

Bottom line: Maryland is perennially one of the most talented teams in the Big Ten and despite some underwhelming performances in big games over the years under Turgeon, the Terps have won 23 or more games in four of the last five seasons. Cowan and Smith are as formidable of a one-two punch as you’ll find, but it’s the complementary pieces that could ultimately determine this team’s ceiling.

Quotable: “We want to take the next step. We feel like we’ve been really good for the last four or five years. We had one off year, but we really want to take another step, maybe try to win a championship whether it’s the league championship or tourney, or advance in the postseason. We have the talent; it’s just us coming together and playing well at the right time.” – Turgeon to Blue Ribbon college basketball yearbook.