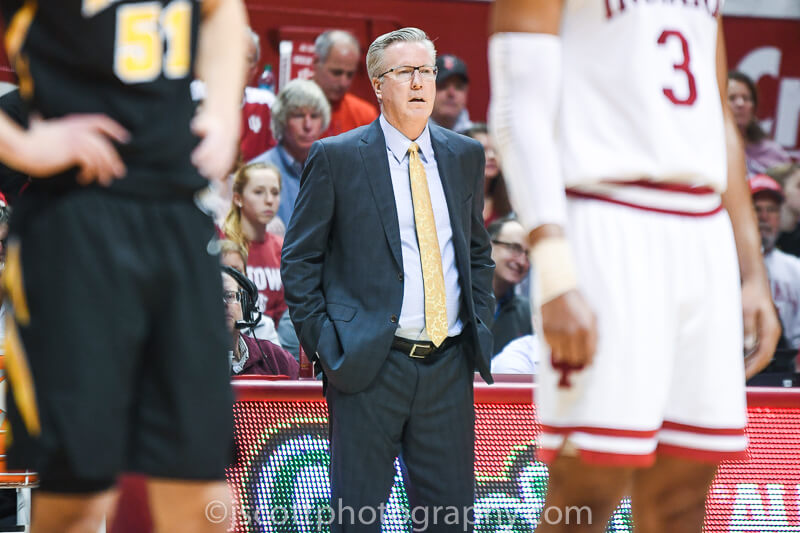 With the start of college basketball season on the horizon, we’ll be taking a long look at the conference at large as well as Indiana’s roster over the next month. Today, we preview Iowa.

Iowa is one of the most difficult Big Ten programs to project entering the 2019-20 season. The Hawkeyes have been picked to finish as high as fourth in the league (Street and Smith’s), but there are also plenty of reasons for skepticism.

Fran McCaffery’s club fixed many of its defensive woes a season ago and used a potent offense to advance to the second round of the 2019 NCAA tournament. But once the final buzzer sounded in Iowa’s 83-77 overtime loss to Tennessee in Columbus, Ohio, reasons to believe a major backside was coming in Iowa City began to emerge.

Tyler Cook, the team’s best frontcourt player, declared for the NBA draft and kept his name in, but wasn’t selected. Jordan Bohannon, who crushed Indiana on two separate occasions last season with late game daggers, underwent hip surgery that could force him to redshirt this season. Isaiah Moss transferred to Kansas and will be eligible this season for the Jayhawks. Do-everything forward Nicolas Baer graduated, which leaves a void that will be tough for McCaffery to replace.

Despite all of that, there are still reasons to believe Iowa will be a tough out in the Big Ten this season.

At the top of the list is the return of sophomore Joe Wieskamp, who cracked the top 10 on our preseason list of the top 25 players in the conference. At 6-foot-6, Wieskamp tested the NBA draft process and is a proven marksman from the perimeter (42.4 percent on 3s as a freshman) who looks poised to step into a much bigger role in Iowa’s offense. He boasted a healthy 65.8 effective field goal percentage on catch and shoot jumpers last season, which ranks in the top five of players returning to the league this season, per Synergy Sports.

Junior Luka Garza is also back and is often overlooked when discussing the league’s best frontcourt players. At 6-foot-11 and 260 pounds, Garza is a solid finisher – 59.4 percent on 2s last season – and also a great free throw shooter. His 81.2 percent mark from the stripe was eighth in the Big Ten last season, which is impressive for a center. Garza isn’t a flashy athlete and doesn’t play above the rim, but his fundamentals and footwork make him a difficult cover for most of the league.

Bohannon’s status for the season is still an unknown, but McCaffery said earlier this week there is “still a chance he could play.” If he can’t go, sophomore Connor McCaffery, freshman Joe Touissant and graduate student Bakari Evelyn will battle it out for minutes at point guard. Redshirt freshman C.J. Fredrick, a former AAU teammate of current IU point guard Rob Phinisee, should give Iowa another shooter to man the perimeter.

On the wing, 6-foot-9 freshman Pat McCaffery arrives as a four-star recruit and redshirt sophomore Jack Nunge, a former Indiana All-Star, is back after sitting out last season. Nunge is 6-foot-11 and 245 pounds, but has the ability to step out on the perimeter.

Garza’s help in the post should come from senior Ryan Kreiner and redshirt junior Cordell Pemsl. The 6-foot-10 Kreiner finished nearly 59 percent of his 2s last season while Pemsl only appeared in two games before undergoing knee surgery.

Bottom Line: Iowa was better on defense last season, but still ranked just 13th in league play in points per possession allowed. Unless that improves, the ceiling is still probably middle of the pack in the league, even if Bohannon plays. Wieskamp and Garza are two very good players, but McCaffery will be relying on young and unproven guys to fill out the rest of the rotation. Unfortunately for Iowa, there won’t be much of an opportunity to iron out all of the wrinkles early on as the Hawkeyes play a tough slate of Texas Tech, Syracuse, Iowa State and Cincinnati in non-conference play.

Quotable: “I learned a lot. It was a great experience to see a couple different places, the environment, and the type of personnel. I was able to work out with different guys from different teams, and receive feedback on areas where I can improve moving forward. That way if I do have a good year or in the future, that’ll be something I can do — take that next step.” – Wieskamp on what he learned from going through the pre-NBA draft process last spring.