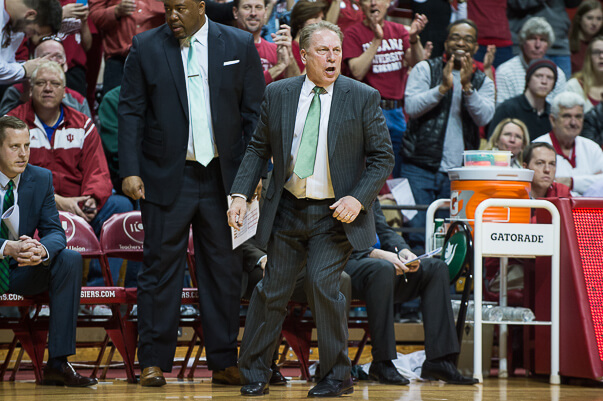 After an uninspiring regular season, Michigan State did what they’re best known for in March – win. A 7-seed in the NCAA tournament, the Spartans reached their 9th Final Four last year, Tom Izzo’s 7th with the team in his 20-year career as head coach. MSU has made the tournament 18 straight years, and will have the talent to make that 19 this year.

The Spartans graduated guard Travis Trice (signed free agent deal with the New York Knicks) and forward Branden Dawson, who was selected 56th overall by the New Orleans Pelicans in the NBA draft, from a team that finished 27-12 a season ago.

Senior Denzel Valentine has a chance to become a star. The guard averaged 14.5 points per game last year and is the perfect combination of scorer and distributor. He will be paired in the backcourt with Lourawls “Tum Tum” Nairn, Bryn Forbes and transfer Eron Harris from West Virginia. The Spartans should have one of the better backcourt tables in the conference with speed (Nairn), shooting (Forbes), scoring (Harris) and a fantastic playmaker in Valentine.

Sophomores Marvin Clark Jr. and Javon Bess figure to play meaningful minutes at forward. Each played about 11 to 12 minutes a game last year, but Bess struggled with injuries. Now Clark is out six to eight weeks with a foot injury.

Big man Gavin Schilling will anchor the inside, with help from Matt Costello. Both played roughly equal minutes, and despite Schilling starting last season, Costello actually posted better numbers in both points and rebounds. Davis should also see plenty of time at the four spot.

Izzo’s teams have always been built around a tough man-to-man defense, and through players who know how to run his system. Even though Trice and Dawson will both be missed, there are plenty of other talented players waiting to step up. The Spartans will be tested early with contests against Kansas, Boston College, Louisville and Florida on the non-conference portion of their schedule.

Bottom Line: Michigan State has arguably the best coach in college basketball, and when you combine that with the talent that’s on this roster it will mean yet another NCAA tournament appearance and potential for a deep run. There may be rough patches during the regular season, but as the season goes on Michigan State should be ready to peak and hit their stride in March.

Quotable: “I’m excited about the non-conference schedule that we’ve put together. The first thing that jumps out at me are the Louisville and Florida games at Breslin Center. We are excited to bring some of college basketball’s top programs to our home fans this season. It’s part of a continual quest to schedule great non-conference games home for our fans that have been so loyal and give us one of the best home court advantages in the nation… Playing Kansas in the Champions Classic will be a terrific early-season test… When you combine the non-conference schedule with what I expect to be a deeper Big Ten in the upcoming season, we will certainly be tested early and often throughout the year.” – Izzo to msuspartans.com in August.