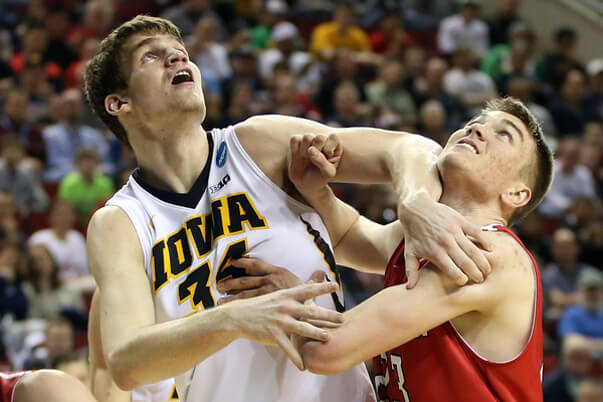 With the start of college basketball season on the horizon, we’ll be taking a long look at the conference at large as well as Indiana’s roster over the next month. Today, we continue our look at the Big Ten with the Iowa Hawkeyes.

In a Big Ten that could have as many as eight or nine teams competing for a spot in the NCAA tournament, Iowa is one of the most difficult teams to forecast.

The Hawkeyes return four starters from a team that won 22 games and made the round of 32 in March, but lost two valuable pieces in Aaron White and Gabriel Olaseni that will be difficult to replace. The talent Fran McCaffery returns to Iowa City is experienced with four seniors who played heavy minutes in the team’s NCAA tournament loss to Gonzaga all back.

The group is led by 6-foot-9 senior forward Jarrod Uthoff. With the graduation of White, he should be the team’s go-to scorer and perhaps its best defensive rebounder. As a junior, he hit 37.2 percent of his 3s, but was just average on 2s at 46.8 percent. If he can improve inside the arc, Uthoff becomes an even tougher matchup because of his size and versatility.

The league’s most controversial player, Adam Woodbury, is also back for his senior season. At 7-foot-1, Woodbury arrived at Iowa as one of McCaffery’s highest rated recruits, but has always been foul prone. Without Olaseni to back him up, Iowa needs a more mature Woodbury to emerge this season.

Iowa looks solid in the backcourt with Anthony Clemmons, Mike Gesell and Peter Jok. Gesell struggled with his shooting last season due to an elbow injury, but his assist rate of 32 percent is one of the best among returning players in the country. Clemmons hit a team-best 37.3 percent of his 3s last season, but needs to finish better inside the arc (38.8 percent on 2s). Jok, a 6-foot-6 junior, was a bit of a disappointment last season after taking over for Devyn Marble. He posted an effective field goal percentage of just 43.5 as a sophomore, well below respectable for a player who came in with a reputation as a shooter.

Beyond those familiar names, much of Iowa’s success will hinge on eight new faces. Redshirt freshman Brady Ellingson could fill in for the departed Josh Oglesby as a shooter in the backcourt.

Up front and on the wings, sophomore Dominique Uhl, freshman Brandon Hutton, freshman Isaiah Moss and JUCO transfer Dale Jones all appear to have promise. The 6-foot-9 Uhl played 10 minutes per game last season and averaged 2.1 points and 1.8 rebounds.

Hutton and Moss, both from Chicago, both arrive as 3-star recruits according to the 247Composite. And Jones, a 6-foot-8 forward, was a standout last season at Tyler Junior College in Texas where he averaged 16.9 points and 8.3 rebounds per game.

Bottom Line: Iowa is aiming for its third consecutive NCAA tournament appearance and the Hawkeyes appear to have the talent to achieve that goal. Uthoff is one of the league’s most under appreciated players and should get a chance to finally shine as the team’s best player. The backcourt has potential to be solid assuming Gesell is healthy and is able to score more efficiently to complement his ability to distribute. This group looks like a solid bet to finish in the top eight or nine of the Big Ten, which should put them squarely in the discussion come March.