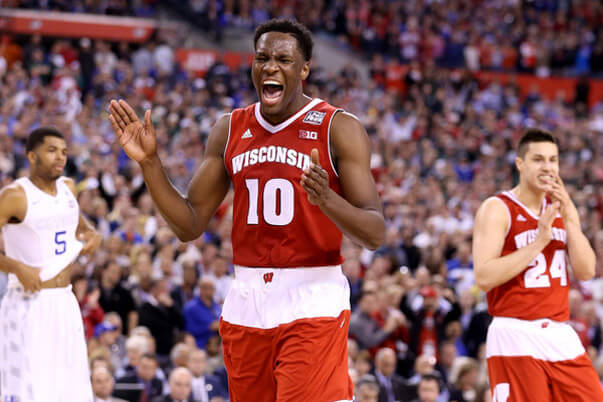 With the start of college basketball season on the horizon, we’ll be taking a long look at the conference at large as well as Indiana’s roster over the next month. Today, we continue our look at the Big Ten with the Wisconsin Badgers.

It was a historical season last year for Wisconsin. The Badgers won the Big Ten easily and knocked off 38-0 Kentucky in the Final Four before falling to Duke in the national championship game.

It could be another historical season in 2015-2016, but for different reasons. The upcoming season could be Bo Ryan’s last in Madison even though the 67-year old backed off the retirement talk in August.

Wisconsin will be going through a retooling year with five of the seven players who played in the national championship game departed. Four were starters for the majority of the season.

They lose Frank Kaminsky, who was the National and Big Ten Player of the Year, and was drafted 9th overall in first round of the NBA draft by the Charlotte Hornets. Sam Dekker left early and was selected 18th overall in the NBA Draft by the Houston Rockets. Josh Gasser was a four-year starter. Traevon Jackson started for more than two years before an injury derailed his senior season. Duje Dukan was a key contributor off the bench.

With so many pieces gone, it will certainly be a challenge for Ryan and his squad to reach their 18th straight NCAA tournament. A Ryan coached Badger team has never finished outside the top four in the conference and has reached the Final Four two straight seasons.

Returners Nigel Hayes and Bronson Koenig are the key returnees and the Badgers hopes will rest heavily on both players. Hayes, a forward, started all 40 games last year and Koenig, a guard, started 24, filling in for Jackson when he was injured.

The 6-foot-8 Hayes was one of the Big Ten’s most efficient players last season. After not even attempting a 3-pointer as a freshman, he made close to 40 percent as a sophomore (on 101 attempts). Koenig, meanwhile, was the most efficient ball screen guard in the conference as he scored 1.02 per possession in those situations according to Synergy Sports.

Alex Illikainen, Brevin Pritzl (247Composite top 100), Charlie Thomas, Khalil Iverson and Andy Van Vliet are all joining the program. Pritzl has a chance to crack the starting lineup, likely competing with redshirt junior Zak Showalter for the other spot at guard.

Junior Vitto Brown and redshirt freshman Ethan Happ will both have a shot to start in the front court, but are relatively unknown. Happ, however, has drawn high praise from Kaminsky.

“I think Ethan Happ is going to be a really good player for this program” Frank Kaminsky told Fox 6 in April. “He’s one of those guys who gets better every day. He has a will to come in and compete every day in practice and get better.”

The Badgers will face several non-conference tests, squaring off with Georgetown, Temple and Marquette at home, and traveling to Oklahoma and Syracuse.

Bottom Line: This will be a remarkably different Wisconsin team. The only senior is a walk-on who just received a scholarship. Finishing in the top four of the Big Ten isn’t out of the question, but will certainly be a challenge. Of all the teams in the Big Ten, the Badgers might be the hardest team to predict.

Quotable: “I am (rethinking my plan to retire). Everybody kind of thinks they know when they’re ready to retire, or step aside. I’m not totally sure. … I just wanted to get it out there that I’m not going to be able to do this forever. But who can say one year? Who can say that? I simply cut to the chase by saying I’ll do another year and we’ll see what happens in the next number of months.” – Ryan to ESPN in August.