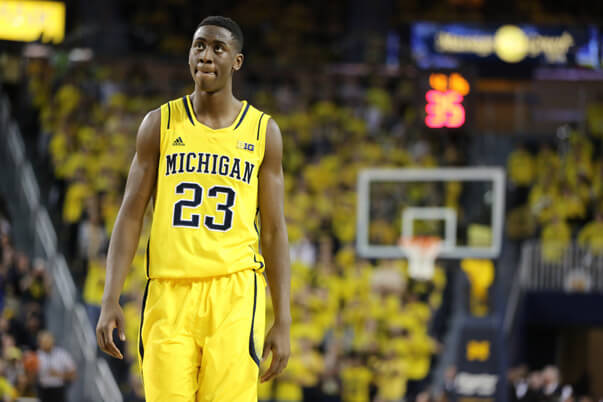 After a run to the national championship game in 2013 and a narrow loss to Kentucky in the Elite Eight in 2014, last season was a year of regression in Ann Arbor.

The Wolverines started the season ranked No. 24 in the Associated Press top 25 and finished the season with a 16-16 record. It was the first NCAA tournament miss for Michigan since the 2009-2010 campaign. The primary culprit for the slide was injuries as John Beilein’s backcourt of Caris LeVert (15 games) and Derrick Walton (14 games) missed significant time.

There could be upside for both of those setbacks, however, as Michigan enters the 2015-2016 season. The absence of LeVert and Walton forced Beilein to play plenty of freshmen, who will now slide back into more complementary roles armed with experience.

With LeVert and Walton healthy, Michigan looks primed for a bounce back season. The 6-foot-7 LeVert would have been picked had he entered the NBA draft, but opted to return for his senior season. He was outstanding as a sophomore in a sidekick role to Big Ten player of the year Nik Stauskas, but now has to prove he can stay healthy. When he was on the floor last season, LeVert led Michigan in minutes, points, rebounds, assists and steals.

Walton’s steady presence at point guard as a freshman was a major reason the Wolverines won the conference and were an Aaron Harrison heartbreaker away from a second straight trip to the Final Four. But he was clearly not the same player last season before he was shut down for the year with a foot injury. He shot just 32.4 percent on 2-point attempts.

Assuming both guys return to pre-injury form, Michigan has an assortment of other pieces to mix and match in the backcourt and on the wing. Junior Zak Irvin, who is currently recovering from a back procedure in early September that will sideline him for up to eight weeks, averaged 14.3 points last season. He scored in double figures 27 times and made 77 3’s, a team-high.

Senior Spike Albrecht and sophomore Muhammad-Ali Abdur-Rahkman also return in the backcourt. Albrecht, who hit 37.2 percent of his 3s last season, had offseason surgery on both hips and is expected to be healthy by the start of the season. Abdur-Rahkman needs to cut down on the turnovers (20.6 TO%), but scored in double figures in four of Michigan’s final 11 games.

On the wing, sophomore Aubrey Dawkins looks to build on an outstanding freshman campaign in which he shot 53.7 percent on 2s and 43.2 percent on 3s. Williams College 6-foot-8 transfer Duncan Robinson is also available after sitting out last season as a transfer. As a freshman, he was the Division III freshman player of the year and it’ll be interesting to see how he adjusts to the higher level of competition.

Another name to keep in mind is freshman Moritz Wagner, a 6-foot-9 forward from Berlin, Germany. Rated a 4-star prospect by the 247Composite, Wagner has been described by Beilein as a player with “tremendous upside.” Sophomore Kameron Chatman was a disappointment in his first season (36.8 eFG%) and will need to elevate his game to remain relevant on a deep roster.

In the post, Beilein opted not to bring Max Bielfeldt back for a fifth year in favor of giving the trio of sophomore Ricky Doyle, redshirt sophomore Mark Donnal and redshirt freshman D.J. Wilson more minutes. Doyle figures to get the first chance to start after quietly posting solid numbers last season (6.1 ppg, 3.2 rpg).

Bottom Line: Beilein has plenty of options and depth on this roster, particularly in the backcourt and on the wings. Never a guy to play large rotations, it’ll be interesting to see how the minutes get divvied up. LeVert and Walton are an excellent 1-2 punch and Irvin should be able to build on a strong finish to last season. The post still has questions to be answered, especially when you look at some of the talent there around the league. But Michigan looks primed for a bounce back season and a return to the NCAA tournament.

Quotable: “I think it (the rotation) depends a lot on what we see in October because we’re really multi-positional right now. It depends on some of our big guys and the big guys who are more like forwards. DJ Wilson and Moe Wagner — how they can fit in and still make us efficient? We’re juggling a lot of things it’s all good but we won’t be able to tell some things … I think when it comes to everything nine or ten guys are going to play every game and we have to figure out who those nine or ten are.” – Beilein last month on Michigan’s rotation for next season.