In a televised announcement on ESPNU, class of 2014 forward-center Goodluck Okonoboh announced his commitment to UNLV. Okonoboh, the No. 24 prospect in the 247Composite, also considered Duke, Florida, Indiana and Ohio State. The Wilbraham and Monson Academy (Mass.) took ...

Tonight during halftime of an ESPNU college football broadcast Indiana, Ohio State and UNLV will learn where class of 2014 forward Goodluck Okonoboh will play next season. Okonoboh, a senior at Wilbraham and Monson Academy in Massachusetts, will announce his intentions a little after 9:00 p.m. ET (assuming the first half of the Louisiana-Monroe and Western Kentucky first half doesn't run long) from a studio in Bristol, Connecticut. Here’s our primer for the announcement with everything you need to know: The Essentials Forward/Center, 6-9, 220-pounds, Wilbraham & Monson Academy (MA), Mass Rivals 247Composite: 4-star (24); ESPN: 5-star (21); Rivals: 4-star (32); Scout: 4-star (37) Schools: Duke, Florida, Indiana, Ohio State, UNLV Official visits: Indiana, Ohio State, UNLV

Several class of 2014 prospects being recruited by Indiana will be making official visits this weekend and our latest recruiting notebook takes a look at those campus trips as well as other notes from the first week of the fall recruiting period: · Goodluck Okonoboh, one of IU's top targets in the 2014 class, will make his first official visit this weekend and Bloomington is the destination. The Hoosiers have long been considered one of the favorites to land Okonoboh and getting him on campus is the next logical step in making that happen. It's been well documented, but the relationship between Okonoboh and current IU freshman Noah Vonleh is a very good one and this weekend provides Okonoboh the opportunity for his first up close look at the Indiana campus. · Lourawls Nairn hosted Tom Crean for an in-home visit earlier in the weekend, but the major development for Nairn this week was the addition of Michigan State to his list of three finalists. Nairn had been considering a final three of Indiana, Minnesota and Oklahoma, but the Spartans are making a late push with Tyler Ulis seemingly headed to Kentucky. Nairn will be in East Lansing this weekend and then Indiana will host him for an official visit next weekend.

One of Indiana's top recruiting targets in the class of 2014, Goodluck Okonoboh, will take an official visit to Indiana next weekend. It will be the first official visit for Okonoboh, a 6-foot-9 center who plays at Wilbraham and Monson Academy, which is just outside of Springfield, Mass. 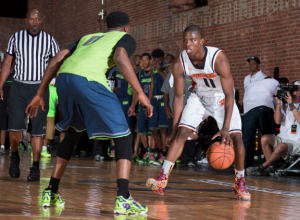 Check out 10 photos by Kelly Kline and Under Armour of Indiana recruiting targets Isaiah Whitehead, Goodluck Okonoboh and Stephen Zimmerman from last night’s Elite 24 in Brooklyn in the embedded photo gallery after the jump.

Class of 2014 forward Goodluck Okonoboh has trimmed his list of schools to five. Mass Rivals AAU coach Vin Pastore confirmed to Inside the Hall Tuesday afternoon Okonoboh is still considering Duke, Florida, Indiana, Ohio State and UNLV (in no ...

Class of 2014 forward Goodluck Okonoboh is about to take the next step in his recruitment. A source close to the Wilbraham and Monson (Mass.) senior told Inside the Hall Sunday evening that Okonoboh will trim his list of schools to “no ...

2014 Recruiting Board: Robert Johnson on the rise

With the July evaluation periods in the rearview mirror and some major shakeups over the past two weeks, Inside the Hall has updated our 2014 Indiana basketball recruiting board. Check out the updated list of prospects the Hoosiers are targeting ...

INDIANAPOLIS — Class of 2014 Wilbraham and Monson Academy (Ma.) forward Goodluck Okonoboh is a top recruiting target for programs like Duke, Indiana, Louisville and Syracuse and was one of the standouts of last week’s adidas Invitational in Indianapolis. Inside ...

INDIANAPOLIS — Mass Rivals coach Vin Pastore doesn’t hesitate when he’s asked about the defensive prowess of his star big man, Goodluck Okonoboh. If there’s a better shot blocker in the country than Okonoboh, who is being courted heavily by ... 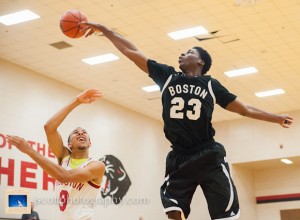 Check out 25 photos by Jamie Owens from the first two days of the adidas Invitational at various sites in the Indianapolis area in the embedded photo gallery after the jump. Purchase prints at JScottSports.com.

(Photo credit: Kelly Kline/Under Armour) The first of three five-day July evaluation periods begins Wednesday at 5 p.m. and Inside the Hall takes you through five things we’ll be watching for as college coaches hit the trail to evaluate prospects: ...