6-Banner Sunday: Jackson-Davis scores 43 points as IU moves to 6-0 with win over Marshall 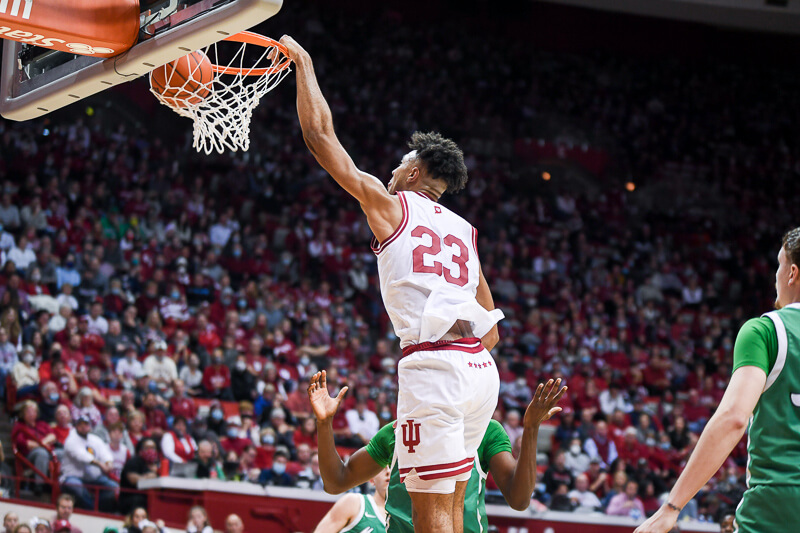 IU had a busy week on the court with three games. All were victories with varying degrees of success. 6-Banner will look at each game in detail before concluding with a look at how other IU sports are doing.

In a brief piece of news, IU offered 2025 forward Trent Sisley a scholarship this week.

IU was back at it Tuesday against a struggling Jackson State team and took advantage for an easy 70-35 win.

Afterward, both Tiger coach Wayne Brent and Woodson reacted to the game. Once again, Inside The Hall had a photo gallery, Ryan Corazza wrote his Minute After and Film Session, and Tyler Tachman had Five Takeaways.

The Hoosiers had by far their toughest test of the week yesterday when they played the Thundering Herd. Marshall pushed them hard and took a double-figure lead in the first half before IU rallied. The Hoosiers themselves would push the lead to double figures in the second half before a comeback by Marshall put the game in peril. IU responded and closed out the game late for a 90-79 win to improve to 5-0 on the season. Trayce Jackson-Davis had a career-high and Assembly Hall record 43 points as the Thundering Herd could not stop him from dominating in the paint.

Afterward, Marshall coach Dan D’Antoni (brother of legendary NBA head coach Mike D’Antoni) spoke as did Woodson. Inside The Hall again had a photo gallery and Ryan Corazza his Minute After.

Inside The Hall’s Alex Bozich broke down what was discussed and posted the show itself. On the show, Woodson recapped last week’s games and dove into a variety of other topics when he was interviewed by Don Fischer.

Banner #5 – Podcast On The Brink And Assembly Call Postgame

Mike Woodson was not the only one to be on a show this week as both Podcast on The Brink and Assembly Call Radio had episodes as well.

POTB did a pre-Thanksgiving Mailbag with Tyler Tachman while Assembly Call had a postgame show for all three games this week.

Three IU teams had their season come to an end this week. For Football and Volleyball disappointing seasons are mercifully over, while Men’s Soccer had a heartbreaking loss in the NCAA Tournament to complete another solid season.

• Men’s Soccer beat Bowling Green in the round of 32 of the NCAA Tournament. They then fell to Washington in the Sweet 16 ending their season. I wrote a column in the Assembly Call Community about the final game loss being a result of early season defeats putting the Hoosiers in a bad position for a long tournament run.

• Women’s Basketball lost a close one to a highly ranked Stanford team before edging Miami.

• Volleyball beat Iowa for their fourth Big Ten win before a season-ending loss to Purdue and Wisconsin.

• Swimming and Diving competed at the Fall Invite. This led to several players getting weekly awards.

• Field Hockey had a player honored.