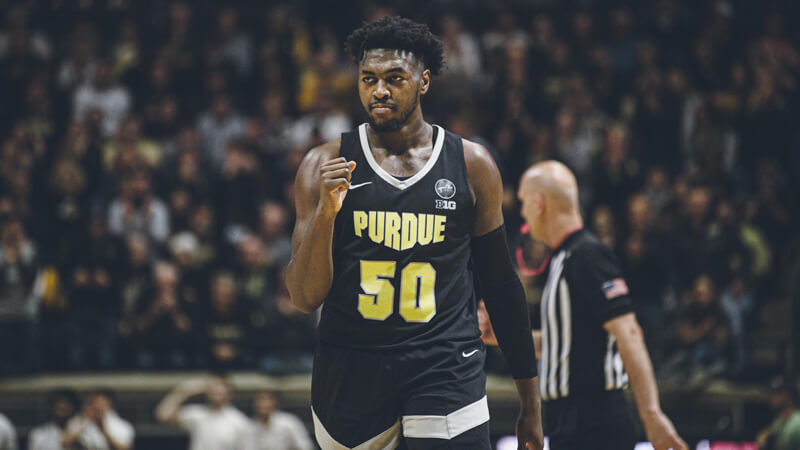 With the start of college basketball season coming in early November, we’ll be taking a long look at the conference at large as well as Indiana’s roster over the next month. Today, our team previews continue with a look at Purdue.

Purdue is coming off an impressive season where the team surpassed expectations — finishing fourth in the Big Ten.

Although the Boilermakers finished with an 18-10 overall record, they capped off their season on a lower note. Purdue suffered back-to-back overtime losses to Ohio State in the Big Ten tournament and then No. 13 seed North Texas in the first round of the NCAA tournament.

“That’s what we really talked about, was learning from that and being better, even in a better position in next year’s hopeful NCAA tournament,” Matt Painter said at Big Ten Media Day on Oct. 8. “We have to be able to use that as motivation.”

Despite that loss, the expectations for Painter’s squad still remain high entering the 2021-22 season. The preseason AP top 25 slotted the Boilermakers in at the No. 7 spot.

Much of this optimism surrounding the program is due to the experience it’ll boast in returning all of its starters and nine scholarship players from last season. The only notable loss for Purdue is junior forward Aaron Wheeler, who transferred to St. John’s.

Guard Jaden Ivey is back for the Boilermakers after an impressive freshman campaign and has been named to almost every preseason All-Big Ten and All-American list.

The 6-foot-4 sophomore was just named a preseason second-team All-American by The Athletic. He is just one of four Big Ten players named to their two teams alongside Illinois’ Kofi Cockburn (first team) and then Trayce Jackson-Davis and Michigan’s Hunter Dickinson on the second team.

His work last year — averaging 11.1 points, 3.3 rebounds and 1.9 assists per game — earned him a spot on the Big Ten All-freshman team. Ivey then went on to play on the FIBA U19 World Cup team over the summer and helped lead Team USA to a gold medal.

At shooting guard, Stefanovic is the Boilermakers’ top perimeter threat after having netted 139 3-pointers for his career. Last season, he shot 40 percent from 3-point range and 84.2 percent from the free throw line. Despite his high offensive rating, Stefanovic takes on more of a facilitator role on the offensive end of the floor.

In the frontcourt, sophomore forward Mason Gillis will likely start at power forward. Although Purdue’s top-two recruits in Trey Kaufman and Caleb Furst both play power forward, Gillis’ should remain in the starting lineup after his impressive redshirt freshman year.

He shot 60 percent from inside the arc, but also stretched the defense with his 35.2 percent shooting average from outside. He also tallied 4.1 rebounds per game last season.

The final piece in the starting lineup is mainstay Trevion Williams who decided to return for his senior season. He was named first-team All-Big Ten last season.

Throughout his first three seasons at Purdue, he’s recorded 21 career double-doubles. The 6-foot-10 Williams is a force in the post and is not only talented in his scoring — posting 21 double-digit games last season — but also in his passing down low.

“He’s a better player than he was two years ago,” Painter said. “He has more knowledge of the game. He’s such a good offensive rebounder, such a good passer. Those are his two extremes on a high level.”

Like Ivey, Williams has also been named to a number of preseason All-American lists. Painter said what makes him so valuable is his vision of the court that allows him to do a lot of different things.

But the Boilermakers are deep at the five position. Coming off the bench will be the 7-foot-4 center Zach Edey. He proved himself as a freshman last season averaging 8.7 points and 4.4 rebounds per game while shooting 59.7 percent from the floor.

Last season, Painter occasionally played Williams and Edey together, but more often had one of the big men on the bench for purposes of fatigue and foul trouble. When asked if he plans on playing them together, Painter didn’t have a concrete answer.

“I think our matchups, with our team, will really be determined more defensively than probably offensively,” Painter said.

He said it’s going to come down to if Williams can function as the four on defense, but that isn’t to say he’ll have him play the perimeter. He still wants Williams to post up in the paint if him and Edey are on the court together.

Bottom line: Purdue is bringing back a wealth of experience and talent with its nine returning scholarship players and two All-American candidates. Painter will look to Hunter, Stefanovic and Williams to lead the team, while Ivey and Edey continue to emerge as underclassmen. If the Boilermakers can work on their perimeter defense and decision-making with the ball, the ceiling for this team is a conference title and a much deeper NCAA tournament run than they saw last season.

Quotable: “I think the keys don’t come down to the talent, the keys come down from the production from that talent and the sacrifices you have to make to be on a team. That’s hard to do. This is a hard thing to do.” – Painter at Big Ten media day earlier this month.