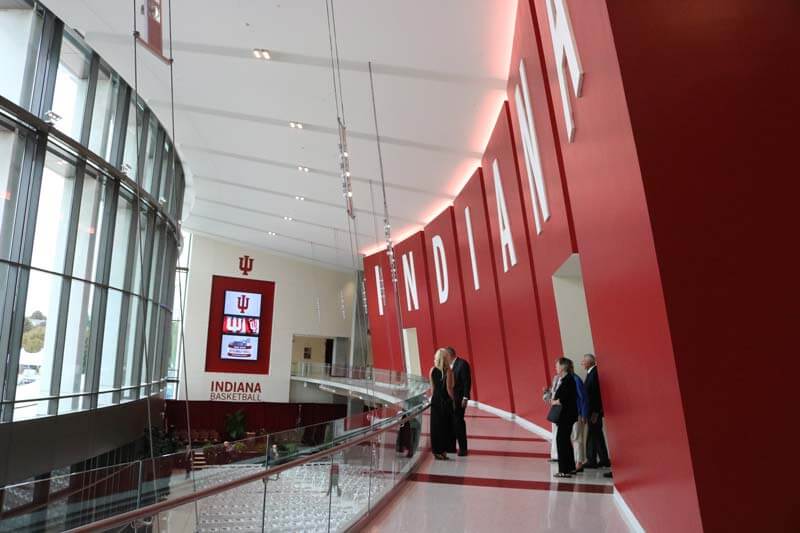 The only certainty with relation to college sports this fall is uncertainty.

It was another week of change as the potential for college sports to be played this fall remains precarious. From additional conferences announcing the postponement of fall sports seasons to the shut down of voluntary workouts for members of the IU football program in Bloomington due to positive COVID-19 tests, it remains to be seen if and how college sports will proceed in the coming months.

With all this news coming during college basketball’s offseason, only some of the rulings already made will affect the playing of the 2020-21 season, although that can also change at a moment’s notice.

In anticipation for whenever the on-court action does resume, this week featured stories concerning some of the biggest talking points as we enter Archie Miller’s fourth season in charge at Indiana, as well as an ongoing look at IU recruits and past members of the program now playing professionally.

Voluntary workouts for members of the IU football program were paused after six participants tested positive for COVID-19.

This measure does not affect the voluntary workouts currently underway for other IU sports programs, including both men’s and women’s basketball.

Elsewhere around the country, significant news was also announced over the past week with regard to the playing of fall sports.

The Ivy League’s ruling said no college sports would be played until 2021, impacting the college basketball non-conference schedules for the league’s members.

No Power Five conference has yet announced changes to it’s 2020-21 basketball plans, but news continues to emerge on this front each day.

Whenever and whatever form the college basketball season comes in, there are obvious story lines to follow with the IU program as Archie Miller enter’s his fourth season as head coach.

In this vein, the Inside the Hall ‘Offseason story lines’ series started back up this week by exploring some of the biggest hot-button issues concerning the program.

The series, evenly divided with three stories this week and three stories next week, touched on the following topics over the past few days:

Where will Trayce Jackson-Davis fit among the Big Ten’s best players as a sophomore?

How will Al Durham adapt, yet again, in his final season as a Hoosier?

Be sure to stay tuned for the final three installments of the series next week. While not an official story line set to be covered in this series, this week’s edition of Assembly Call Radio with Andy, Coach and Ryan focused on how much Hoosier fans can expect each freshman to contribute to the team next season.

While a ban preventing on-campus recruiting activities remains in place for college athletic programs, Archie Miller and the Hoosiers have nonetheless continued their virtual pursuit of some of the nation’s best players.

This week, three of those recruits were profiled by myself and Alex Bozich at Inside the Hall, although only one of these players currently has an IU offer.

That player is James Graham, a Class of 2021 forward from Wisconsin who gained an IU scholarship offer in early July. Graham averaged 20.6 points and 6.6 rebounds per game in his junior season of high school ball, and while the COVID-19 pandemic has limited his chances to impress schools during the summer, he knows things like the Indiana offer have come his way thanks to years of previous hard work.

“It was just my time,” Graham said. “I’ve been working my ass off and doing all of the things I can do. I just kind of marketed myself as well.”

Elsewhere, Indiana has not yet extended offers to, but remains in pursuit of, Class of 2022 big man Joe Hurlburt from North Dakota and Class of 2022 combo guard Isaac McKneely from West Virginia.

One of the few live team sporting events to take place in the United States in recent months was The Basketball Tournament (TBT), a single-elimination tournament featuring primarily former college players and current overseas players combining forces on teams in pursuit of a $1 million winner-take-all cash prize.

The last three editions of TBT have featured former IU players Remy Abell and Maurice Creek playing for team Sideline Cancer, and this year’s tournament, which ended Tuesday night, represented the team’s deepest run and the most individual success for Abell and Creek in the event.

Sideline Cancer enjoyed a Cinderella run to the TBT championship game, where it lost in heartbreaking fashion to Golden Eagles, a team made up of former Marquette players. Sideline Cancer was the No. 22 seed in the 24-team tournament, which took place in a fully quarantined setting at Nationwide Arena in Columbus, Ohio.

But the different setup for this year’s tournament didn’t deter Sideline Cancer, which recorded four upset wins to reach the title game and saw Abell and Creek light up the tournament with scoring performances. Creek’s game-winning 3-pointer in the semifinal represented perhaps the most memorable moment from this year’s TBT, and while Abell and Creek were unable to win the championship, both players will likely return to their overseas careers in the near future.

On that note, former IU guard Robert Johnson also secured another overseas contract this week, resigning with Parma Basket in the VTB United League in Russia.

Steve Bouchie, who won a national championship as a member of IU’s 1981 title-winning team and was named Indiana Mr. Basketball in 1979 following his high school career at Washington High School, died last week at the age of 59.

According to The Evansville Courier & Press, Bouchie suffered a heart attack over the Fourth of July weekend.

Bouchie’s career featured 110 career games at Indiana in which he averaged 5.1 points and 3.2 rebounds per contest with 48.3 percent shooting from the field. He was made a member of the Indiana Basketball Hall of Fame in 2009 thanks to his contributions with the Hoosiers and the Washington Hatchets, for whom he tallied 1,311 career points and 842 career rebounds.

After his IU career, which also included winning three Big Ten championships, Bouchie was selected in the 1983 NBA Draft by the Detroit Pistons before continuing his playing career in Italy.

Once a hand injury ended his playing days, Bouchie returned home to Washington, where he served as a member of the Washington Community School Corporation School Board.

If College Football takes place this fall, several Hoosiers are in position to be among the best in the country.

• Women’s Basketball’s Brenna Wise was nominated for NCAA Women of the Year. On a more somber note former coach and Hall of Famer Bea Gorton passed away.

• Indiana Athletics as a whole extended its relationship with the Libman Company.