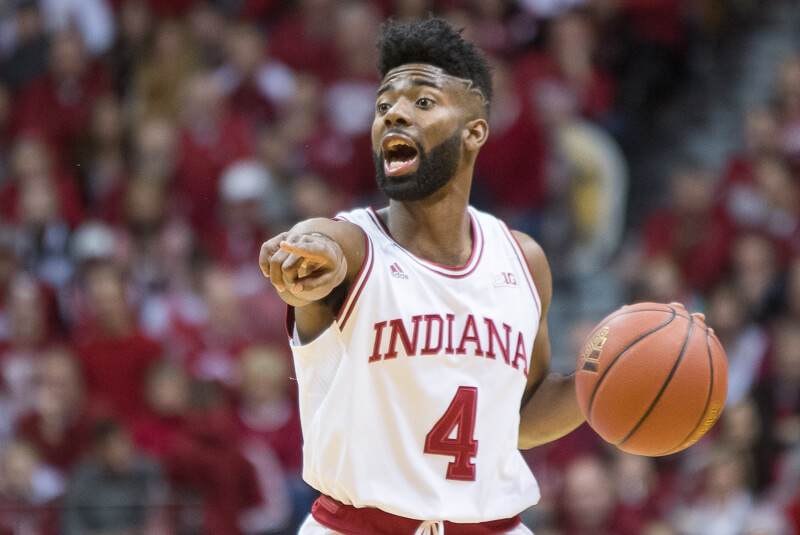 After his 2015-16 campaign was limited for the final month due to injuries, Robert Johnson returned to full health in his junior season.

Johnson had offseason foot surgery that limited his ability to work out in the offseason, but the Richmond (Va.) native was deemed 100 percent in the fall and started 32 of IU’s 34 games.

The 6-foot-3 combo guard finished the season as Indiana’s second leading scorer despite a rough six-game stretch late in the season where he scored in double figures just one time.

Although his overall efficiency numbers dipped as his usage rate grew by 4.3 percent, Johnson showed improvement in a few key areas in his third season. His turnover rate dropped by 2.2 percent, which isn’t a huge number, but is notable given the fact that he had the ball in his hands more often.

After a 27-point performance in a triple overtime win over Penn State on Feb. 1, Johnson’s final month and a half – much like Indiana as a team – was up and down.

His 26 points, six rebounds and six assists were a major reason the Hoosiers won at Ohio State on March 4. That performance was arguably his best of the season as he hit five of his nine 2-point attempts and five of eight from behind the 3-point line.

But there were also some head scratching performances the final month of the season, including going scoreless in a loss at Minnesota and just two points in 33 minutes in IU’s NIT loss at Georgia Tech to conclude the season.

Johnson recently announced that he will enter the 2017 draft, but isn’t hiring an agent. That declaration will give him the opportunity to get feedback from NBA teams and also workout while also leaving the door open for a return next season. At this point, he isn’t on any draft boards and isn’t expected to be invited to the NBA draft combine next month in Chicago.

Assuming he returns, Johnson will have a chance to surpass the 1,000-point career scoring mark early next season and will also be one of the most important pieces on Archie Miller’s first Indiana team.

Bottom Line: The departure of Yogi Ferrell opened up the opportunity for a larger role offensively for Johnson as a junior and his scoring production grew in his third collegiate season. Johnson made the no risk decision to test the NBA draft waters without hiring an agent, which should help him receive valuable feedback over the next month. With a full offseason to work on his game, he should once again be one of Indiana’s most reliable players as a senior. As one of Indiana’s best defenders since arriving on campus, it will be interesting to see what kind of progress he can make defensively under the new coaching staff if he opts to return.

Quotable: “I think my teammates did a good job of finding me and getting me involved early. And I just wanted to come out aggressive and attack. I think I was just in the flow of things, offensively and defensively. I think I had the right mindset from start to finish today and that helped me make shots.” – Johnson following Indiana’s win at Ohio State on March 4.