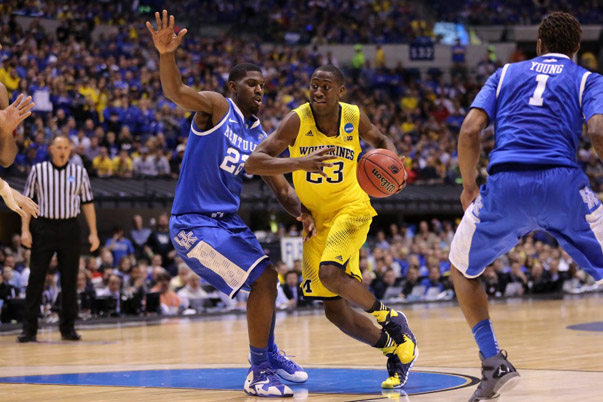 The 2013-2014 campaign was expected to be one of retooling in Ann Arbor. John Beilein had lost a pair of first round picks in national player of the year Trey Burke and Tim Hardaway Jr., and although the Wolverines returned a talented roster, it’s never easy to replace that type of production.

But when the dust settled on the Big Ten race, Michigan had distanced itself from the rest of the conference pack and in doing so, earned a No. 2 seed in the NCAA tournament. Led by Big Ten player of the year Nik Stauskas, the Wolverines reached the Elite Eight, falling to national runner-up, Kentucky.

This year, Beilein will once again have plenty of production to replace if Michigan plans to compete again for a conference championship. Stauskas, Glenn Robinson III and Mitch McGary are all now in the NBA, Jordan Morgan is playing professionally in Italy and Jon Horford transferred to Florida.

In most circumstances, a program that lost three NBA draft picks and two valuable frontcourt pieces would be expected to take a step back. But it’s a credit to Beilein that Michigan is still being projected as a probable top 25 team and one that should compete for a top five finish in the conference.

So why, exactly, is there optimism about this Michigan team?

Start with junior Caris LeVert, who came in at No. 2 on our preseason list of Big Ten players. The 6-foot-7 guard made major strides as a sophomore and without Stauskas, could take on a bigger scoring role. LeVert was instrumental in Michigan’s late season run to the Big Ten Championship – averaging 16.5 points per game over the final 10 conference games. He also shot an impressive 44 percent from 3-point range in Big Ten play.

Two other returning perimeter pieces, sophomores Derrick Walton and Zak Irvin, will join LeVert in the starting lineup. Walton was more turnover-prone than Beilein would have liked as a freshman (19.9 TO%), but is an exception ball screen scorer and hit better than 40 percent on 3s. Irvin, meanwhile, also hit more than 40 percent of his 3s in his debut season and was the team’s leading scorer on its four-game tour of Italy.

Beyond those three, Michigan also returns junior Spike Albrecht in the backcourt and welcomes Muhammad-Ali Abdur-Rahkman, a spring signee.

The frontcourt situation is less certain, but given Beilein’s penchant for playing small, it’s an area where deficiencies can be overcome. Freshman Kameron Chatman, a Jordan Brand All-Star from Portland (Ore.), was a major recruiting win for the program and will likely slide into the spot vacated by Robinson. While not the athlete that Robinson was, Chatman is a better passer and should start from day one. Freshman Aubrey Dawkins, the son of Stanford coach Johnny Dawkins, will likely serve as a backup for both Irvin and Chatman.

Freshman Ricky Doyle and redshirt freshman Mark Donnal should both see time at the five as could 6-foot-9 freshman D.J. Wilson, who missed the summer with a broken finger, but brings much needed athleticism and size.

Bottom Line: Michigan lost plenty of talent, but it’s unwise to bet against Beilein given the fact that he just won the Big Ten after losing the national player of the year. The Wolverines, along with Indiana, are probably the league’s youngest team, but the backcourt and wing positions are strong with LeVert, Walton and Irvin. If Michigan just receives serviceable production from guys like Doyle and Donnal, a top five league finish and a return to the NCAA tournament is a solid baseline for this group.