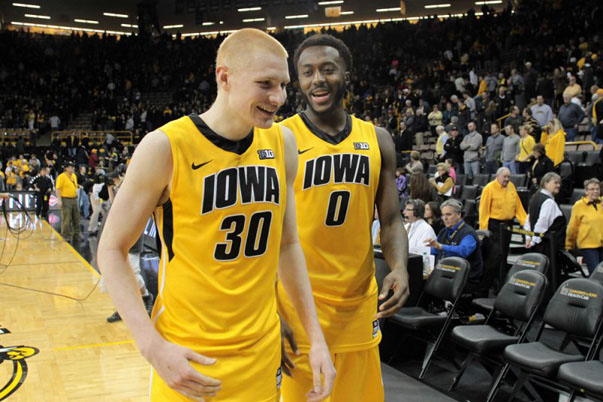 With the start of college basketball season on the horizon, we’ll be taking a long look at the conference at large as well as Indiana’s roster over the next month. Today, we continue our look at the Big Ten with the Iowa Hawkeyes.

Iowa finally reached the NCAA tournament last season in year four of the Fran McCaffery era, but the Hawkeyes didn’t get there easily.

After an 82-70 win at Penn State on Feb. 15 that put its record at 19-6, Iowa dropped seven of its final eight games, including a NCAA tournament “first four” game to Tennessee. The pressure is now on McCaffery to follow up last year’s campaign with another postseason berth and it appears he has the pieces to do just that.

Despite losing leading scorer Devyn Marble to graduation and two other contributors in Melsahn Basabe and Zach McCabe, the Hawkeyes return a solid nucleus of talent that includes three starters. The leader of that group is senior Aaron White, who may be the most underrated player in the conference.  As a junior, he led the Big Ten in effective field goal percentage and was second in free throw rate. He shot over 63 percent on 2s and was also in the top 10 in the conference in defensive rebounding percentage.

The other two starters returning are junior point guard Mike Gesell and junior center Adam Woodbury. Gesell was third among Big Ten players a season ago in assist rate (28.6), but was a poor shooter (43.5 effective field goal percentage). Woodbury, who was viewed as a major recruiting win for McCaffery, hasn’t developed offensively but is a solid offensive rebounder (11.5 OR%) and shot blocker who is very foul prone.

Several other returning Hawkeyes should figure heavily into this year’s rotation, including seniors Josh Oglesby and Gabriel Olaseni, junior Jarrod Uthoff and sophomore Peter Jok. Olaseni was one of the Big Ten’s top offensive rebounders and shot blockers last season and got to the line at a ridiculous clip (100 attempts in 551 minutes). Uthoff is the team’s third leading returning scorer and hit close to 43 percent of his 3s last season.

Three newcomers — sophomore point guard Trey Dickerson, freshman forward Dominique Uhl and freshman shooting guard Brady Ellingson — could also figure into the equation. Dickerson figures to backup Gesell at the point along with Anthony Clemmons. Ellingson should provide guard depth and push Jok and Oglesby, while the 6-foot-9 Uhl should have a chance to grab some of the frontcourt minutes vacated by McCabe and Basabe.

The offseason in Iowa City was a bit tumultuous as Jok and Oglesby were both arrested, but neither issue is expected to linger into the season as McCaffery has already stated that he has no plans to suspend Oglesby and that Jok’s indefinite suspension has already been lifted.

Bottom Line: While the monkey is finally off McCaffery’s back in terms of taking Iowa back to the NCAA tournament, the way last season ended raised some questions about whether the program is ready to step up into the upper echelon of the conference. Marble, who was a second round NBA draft pick, is a major loss, but Iowa has the talent to get back to the tournament assuming it can find some consistent perimeter scoring and shooting.

Quotable: “We have great kids. We don’t have thugs.” — McCaffery when questioned on his team’s offseason problems that included the arrests of Jok and Oglesby along with a former player in McCabe.