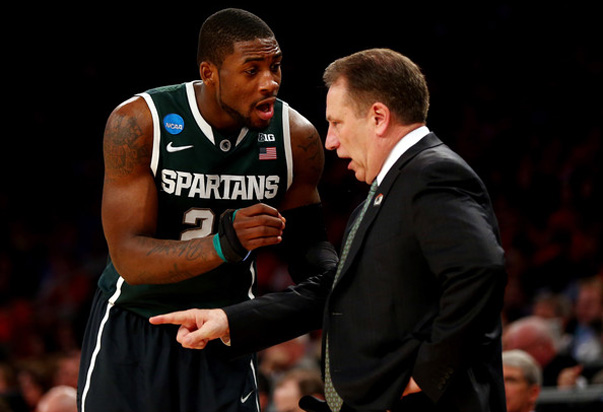 Michigan State started the 2013-2014 season as the favorite to win the national championship. Tom Izzo, no stranger to building Final Four teams, constructed a roster that had talented veterans (Adreian Payne, Keith Appling and Branden Dawson) to go along with a young superstar (Gary Harris).

And while the Spartans ultimately fell short of their goal, Izzo and his company still enjoyed plenty of success including a trip to the Elite Eight and the Big Ten conference tournament title.

This year’s version of the Spartans will certainly look different than the group we last saw in Madison Square Garden in March. Payne and Harris are now in the NBA after being taken in the first round of the draft in June. Appling will be in training camp with the Los Angeles Lakers. Three other players, Kenny Kaminski (dismissed), Alex Gauna (opted not to return) and Russell Byrd (transferred) are gone.

But as we’ve learned in the past, despite the uncertainty, it’s never smart to count Michigan State out of the Big Ten race.

The prized returnee for Izzo is Dawson, a former McDonald’s All-American who is entering his final season of eligibility. The 6-foot-6 senior is one of the Big Ten’s best rebounders and defenders, but needs to show off a more polished offensive game as three of the team’s four leading scorers are gone. Dawson is very efficient (61.5 percent on 2s), but will need to morph into a guy who is capable of hitting midrange shots with consistency.

The other major returning contributor is junior Denzel Valentine, who was a perfect complimentary piece last season. At 6-foot-5, Valentine is an excellent passer and rebounder and can play and defend multiple positions, but is a streaky shooter (48.9 effective field goal percentage). Valentine hit close to 38 percent of his 3s last season, but just 43 percent of his 2s.

Also returning in East Lansing are senior Travis Trice, junior Matt Costello and sophomores Gavin Schilling and Alvin Ellis. Trice hit 43.4 percent of his 3s as a junior and could play some point guard, but is probably better suited off the ball. Costello started 20 games as a sophomore and had a team-high 43 blocks. Ellis could have a shot to expand his role with the departure of Harris while Schilling, a physical power forward, should also have an opportunity for more frontcourt minutes with the graduation of Payne.

Michigan State also welcomes a three-man recruiting class that includes wing Javon Bess, point guard Lourawls Nairn and forward Marvin Clark. Nairn was a fringe top 100 recruit in the 247Composite and former Spartan great Mateen Cleaves has spoken highly of the Bahamas native. All three should have a chance to earn minutes from day one.

Bottom Line: Michigan State is a tough team to forecast because the program lost so much and even its best returning player, Dawson, has some question marks. Valentine is a major x-factor because he’s going to have to take on a leadership role and also an increased load offensively, the latter of which isn’t really a part of his natural makeup. In a Big Ten where parity should run rampant after Wisconsin, Michigan State will be in the next group of teams that should compete for a top five league finish and a NCAA tournament bid.

Quotable:  “I don’t know if our program’s to the point where you ever want to be an underdog and yet we’ve been picked all over the map, and rightfully so. With Payne, Appling and Harris gone there’s some holes there, but there’s been holes other years we found a way to get back to a Final Four or either win a Big Ten championship or be right there knocking on the door.” – Izzo on ESPN2’s Numbers Never Lie.