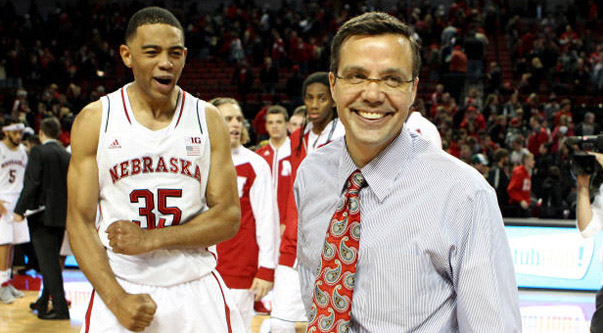 With the start of college basketball season on the horizon, we’ll be taking a long look at the conference at large as well as Indiana’s roster over the next month. Today, we continue our look at the Big Ten with the Nebraska Cornhuskers.

There was no team in the Big Ten last season that surprised more than Nebraska. In year two under the energetic Tim Miles, the Cornhuskers saw the emergence of several stars, the opening of their new arena and an NCAA tournament appearance, all after a 5-13 Big Ten mark just one season prior.

Under Miles, the 2013-14 Big Ten Coach of the Year, the Cornhuskers have taken off as one of the hottest programs in the Big Ten. Last season, the team only lost once in the new Pinnacle Bank Arena — beating the likes of Indiana, Ohio State and Wisconsin at home — and pulled off a significant road win at Michigan State, one that clinched the program’s first NCAA tournament berth since 1998.

Nebraska also saw the emergence of former Texas Tech transfer Terran Petteway, who was playing his first season in Lincoln. Petteway went on to average 18.1 points and 4.8 rebounds per game, earning first team all-Big Ten honors. Petteway used 31.7 of Nebraska’s possessions as a sophomore, the highest of any Big Ten player last season.

Other standouts from last season’s team, guard Shavon Shields, forward Walter Pitchford, guard Tai Webster, forward David Rivers and guard Benny Parker, are all back, as well. Shields is one of the Big Ten’s best in terms of getting to the foul line (60.5 free throw rate) and Pitchford was the least mistake prone player in the conference last season with a turnover percentage of just 6.8.

The Huskers suffered a blow to their frontcourt depth over the summer as Leslee Smith, the team’s best rebounder, suffered a torn ACL and could miss the entire season. Smith’s absence could thrust Georgetown graduate transfer Moses Ayegba and freshman center Jake Hammond into more prominent roles.

As the program enters year three under Miles, it should have a better understanding of what the former Colorado State coach is trying to build in Lincoln. With several returning pieces, and a team that has won plenty of gritty games over the past two seasons, the Cornhuskers already are ahead of many Big Ten squads. This sets the Cornhuskers up, potentially, for another successful season under Miles. The team is ranked in the top 25 in multiple preseason rankings and is projected to finish in the top half of the Big Ten.

And with another seemingly favorable schedule ahead, Miles could lead the Cornhuskers to their first back-to-back NCAA tournament appearances since 1994.

Bottom Line: No team surprised more in the Big Ten last season than Nebraska did, with Miles proving himself to be one of the top coaches in the league in just his second season at the helm in Lincoln. Though he did not have highly-rated recruits — and still doesn’t for this season’s squad — he built a hard-nosed team that proved it was capable of competing with the Big Ten’s best. And with plenty of returning pieces — most of the major contributors from last season’s team — the Cornhuskers could have the same look this season.

Quotable: “Making the tournament and people having seen Pinnacle Bank Arena and the atmosphere are the consistent things I hear from other college coaches, AAU coaches and high school coaches and from prospects and their families. There is a very favorable reaction to Husker basketball right now across the country.” — Miles to Omaha.com in July