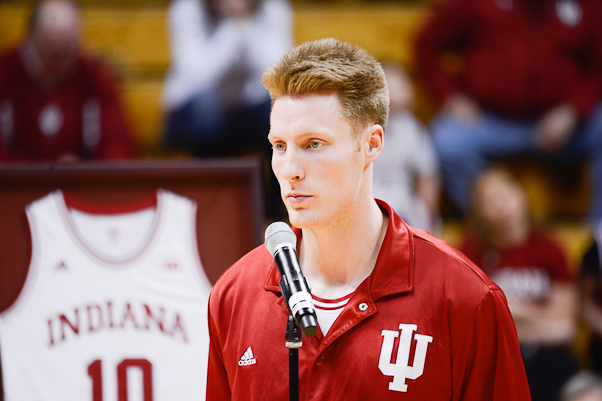 Through his first three seasons as a Hoosier, the Westfield product had accumulated a total of seven points in 77 minutes. As a walk-on in major college basketball, those type of numbers typically come with the territory.

But as the 2013-2014 season moved along, Howard carved out a role as a guy who the coaching staff trusted in key situations. Maybe it was his experience or maybe it was a lack of complete comfort with the other frontcourt options, but Howard actually registered double figure minutes in three straight conference games, something that would have been unthinkable when the season started.

In IU’s first of two Big Ten road wins on Jan. 11 in State College, Howard played just six minutes, but totaled four points and three rebounds and was on the floor for defense down the stretch. In total, he would appear in 15 of IU’s 18 regular season Big Ten games, scoring in five of them.

“Jeff has gone in and been instrumental in games,” Tom Crean said of Howard prior to senior night. “And to see where Jeff has come from from his freshman year to the point where he’s at now has been tremendous. And we feel very, very confident.”

Howard also held value off the court for the Hoosiers as he was named to the Big Ten’s academic all-conference team at the conclusion of the season along with Taylor Wayer, Jonny Marlin and Peter Jurkin.

Bottom line: The role of a walk-on isn’t a glamorous one and a player with Howard’s size and skill level could have opted for more playing time at a lower level, but his willingness to accept his role and also the responsibility of what it means to wear an IU uniform can’t be overstated. He’ll depart the IU program with the experience of playing in the Big Ten and also winning a conference championship.