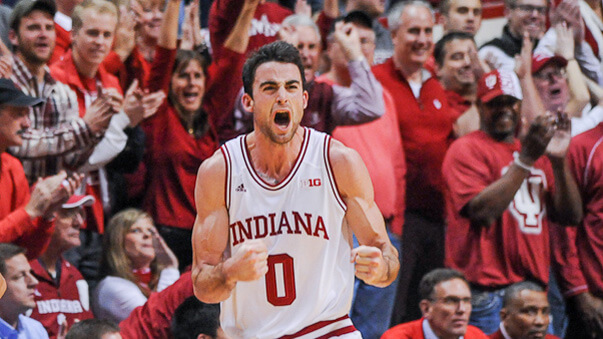 Welcome to “That’s A Wrap,” our player-by-player recap of the 2013-2014 Indiana Hoosiers. Today: Will Sheehey.

This was a transition season for Will Sheehey. After three seasons of being Indiana’s sixth man, the Hoosiers’ spark of energy off the bench, the 2013-2014 season was meant to be Sheehey’s year as Indiana’s senior leader. The one who would help carry the young Hoosiers to on-court success, through scoring and through leadership.

Co-captaining the Hoosiers with sophomore Yogi Ferrell, that is exactly what Sheehey did, starting 31 of Indiana’s 32 games (missing just the Michigan State road game with an ankle injury). He left as one of the fan favorites on a team that struggled with inconsistencies all season. But Sheehey’s road to the end wasn’t as smooth as he might have liked it to be.

Before the season even began, Sheehey injured an ankle at adidas Nations while colliding with Kansas freshman Joel Embiid during a counselor game. In October, he was dealing with a groin injury, according to Indiana coach Tom Crean.

And in the opening months of the 2013-2014 season, Sheehey dealt with offensive inconsistencies. In the first 20 games of the season, Sheehey scored fewer than six points on seven separate occasions. He shot better than 50 percent or better from the field in only 11 of IU’s first 20 games.

But all the while, Sheehey held value in being an on-court leader for the Hoosiers. He helped others in practice. He held others accountable. He was active on the court. “It was guys like Will that changed that culture with their work ethic, with their energy, with their edge,” Crean said. “And he continues to do that to this day.”

Bottom Line: Will Sheehey leaves Indiana with 1,120 points, the 36th-most by a player in program history. He also leaves as one of the most well-liked Hoosiers — he was never necessarily about the attention, rather the desire to win. And though his senior season certainly had its ups and downs, leaving without a postseason, Sheehey does depart Indiana with a mark on the program’s history.