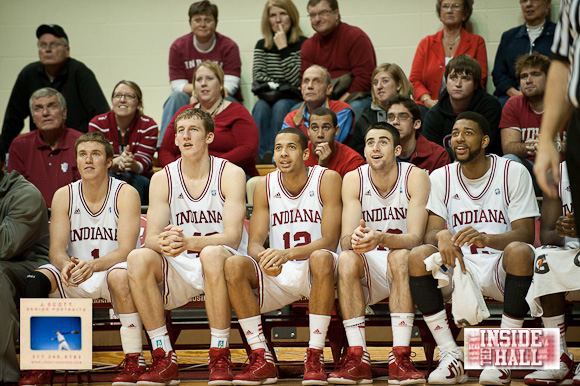 Indiana opened the season with 90+ points in three of its first four games. Many probably attributed it to the level of competition, which included the likes of Stony Brook, Evansville and Savannah State.

But as the wins mounted in the non-conference and the offensive output continued to rank near the top of the heap nationally, it became clear the Hoosiers possessed an elite offense. In the final game of the season, a 102-90 loss to Kentucky in the Sweet 16, it was the offense that kept IU within striking distance of the Wildcats for much of the second half.

It all started in the middle with the efficiency of Cody Zeller. His offensive rating of 126.8 was the 14th best in the country. His effective field goal percentage of 62.3 ranked 22nd nationally. And he was among the top 50 players nationally at drawing fouls and getting to the line.

The residual effect of defenses being forced to game plan for Zeller spilled across the rest of the roster. The perimeter opened up and the Hoosiers went from a 34.6 percent three-point shooting team in 2010-2011 to 43.1 percent in 2011-2012, which ranked second nationally. Four different regulars — Christian Watford, Derek Elston, Jordan Hulls and Matt Roth — hit over 43 percent of their 3-point attempts.

Indiana also enjoyed a healthy jump in free throw attempts and converted at a high rate. The Hoosiers ranked 12th nationally in free throw percentage and were 15th in free throw rate (FTA/FGA). Over 23 percent of IU’s points came from the foul line. It was a theme Tom Crean emphasized early in the season and a clear area of improvement.

Beyond the statistical measuring sticks, Indiana showed maturity with better decision making and crisper ball movement. This led to a far more balanced offensive attack as evidenced by the fact that six different players averaged better than 7.5 points per game and four averaged double figures.

The Bottom Line: The Hoosiers’ jump from an average offense in 2010-2011 to an elite offensive in 2011-2012 coincided with their jump from the bottom of the Big Ten into the top 15 teams in the country. Many wondered what impact Zeller could and would have as a freshman. Ultimately, he was the missing piece Indiana needed to turn the corner offensively. Not only did he post good enough numbers to rank in the top 10 of KenPom’s national player of the year race, his unselfishness led to an improved cohesiveness.

With nearly every key piece returning next fall, the next test will be integrating five-star point guard Yogi Ferrell into the mix and continuing to operate with similar levels of efficiency.