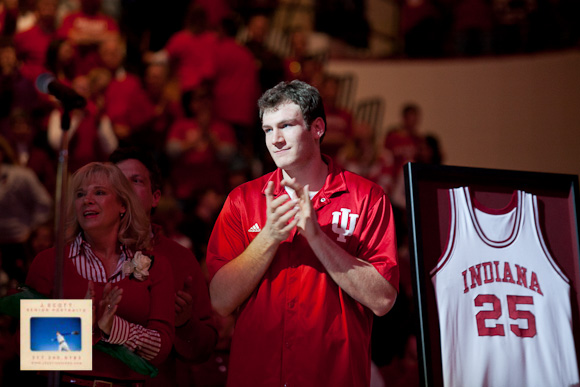 Tom Pritchard never had it easy during his time in Bloomington. He and Verdell Jones, who we looked at yesterday, had to sacrifice more than any other players on the Indiana roster.

Pritchard said he originally committed to Indiana because he wanted an opportunity to play in the NCAA Tournament. Even when it became clear it would be quite a while before the Hoosiers were back in the Big Dance — and once it became clear his role would be much different than the one he played in high school — Pritchard decided to honor his commitment.

His minutes dipped from 29 per game his freshman year to 19.9 as a sophomore, 18.2 as a junior, and only 9.9 this season. With the addition of coveted big man Cody Zeller, Pritchard became a sparingly used energy guy off the bench. He tried to prepare Zeller for Big Ten competition in practice, and he did his best to affect the game in the short time he was on the floor.

Pritchard, who was often blamed by the fans during his sophomore and junior seasons as the team struggled, started to become a fan favorite toward the end of his career. His put-back dunk against Minnesota last season became an instant hit on YouTube (ironically off a miss from Jones), and Hoosier Nation started to see how much Pritchard had given up for the good of the team.

While his numbers seemed insignificant this season, Pritchard was a big part of many of the Hoosiers’ 27 wins. He excited the Assembly Hall crowd whenever he came into a home game, and he spelled Zeller when he needed a rest. Pritchard also got better at setting ball screens as he was called for fewer offensive fouls than the previous year.

Bottom line: Pritchard will be remembered by Indiana fans for all that he gave up to remain a Hoosier, but also for his unique personality. He posted a video on Twitter of him ‘Tebowing’ after his last final exam of the fall semester, and said he might do it again during his senior night speech. When I asked him during the NCAA Tournament why he didn’t, he said, “Dang, man, I completely forgot about that.”

Pritchard was always one of the more likable guys on the team, and always seemed to keep his teammates loose in big games. He went through a dramatic transformation during his time in Bloomington — from a starter to a bench player — but it never seemed to bother him. He accomplished his goal of playing in the Big Dance, and he will be remembered for being one of the main guys to believe in the Indiana program and help bring it back from unspeakable depths.

I think it’s pretty safe to say there will never be another Tom Pritchard.