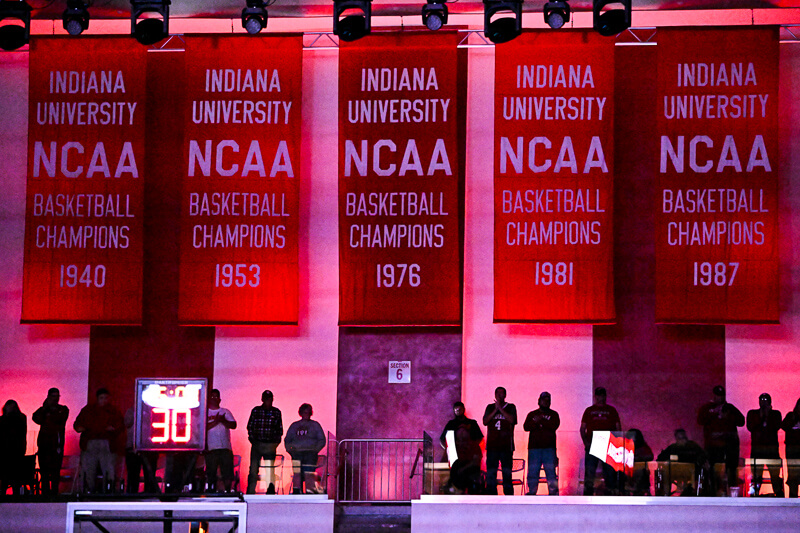 The season is finally here, and IU put on a show for their fans with the most hyped Hoosier Hysteria in a long time. The men’s and women’s basketball teams will likely be ranked and compete for conference titles. The league echoes those expectations as Trayce Jackson-Davis became the first Indiana player in a decade to be named preseason Big Ten player of the year. Women’s star players Grace Berger and Mackenzie Holmes received recognition as well.

Also, Inside the Hall had a busy week as they continued their preview series of other league teams, brought back Podcast on the Brink after a hiatus and posted more player videos from media day. Meanwhile, AC Radio also had a new episode on Thursday, and we will as usual conclude with a look at how other IU sports off the court did over the last few days.

Hoosier Hysteria has been around as a yearly event to open the season for a few decades. This one though had more glitz and glamor than ever before and several notable recruiting targets were in attendance.

It began with head coaches Mike Woodson and Teri Moren riding onto the floor in convertibles and they were interviewed by emcees Courtney Cronin and Rhett Lewis. Woodson provided the most memorable quote of the night involving a curse word. Also, much of the staff and Tamar Bates brought their kids out when introduced and popular rapper G Herbo performed a concert after the events on the hardwood.

In terms of the basketball itself, Miller Kopp and Chloe Moore-McNeil won the 3-point contest, while Race Thompson and Mackenzie Holmes were victorious in the skills competition. A brief six-minute scrimmage for the men’s team concluded the sports portion of the evening before rap music engulfed the building.

The lower bowls of Assembly Hall were nearly full and Inside the Hall’s Amanda Foster wrote a feature on the fans being there. ITH also had a highlight video and photo gallery from the festivities.

The hyped 2012-13 season for Indiana Basketball saw Cody Zeller named preseason Big Ten player of the year. While this did not come to fruition and Michigan’s Trey Burke was the conference MVP in the end, IU did win the outright Big Ten title that season.

Fast forward a decade and Trayce Jackson-Davis is the first Hoosier to be named preseason player of the year in the league since that memorable campaign Many are predicting IU to be the class of the conference once again (although there is not an official finishing order picked by the league anymore). If Jackson-Davis can win the award, it will be the first time an Indiana player has done so since DJ White in 2008.

On the women’s side, they do still project a conference winner in the preseason and the Cream and Crimson are picked second to Iowa by the media and third by the coaches behind Ohio State and the Hawkeyes. Grace Berger and Mackenzie Holmes were named preseason All-Big Ten selections.

With exhibition play just three weeks away now, Inside the Hall continued its team-by-team preview of each Big Ten squad. This week got into the teams that are expected to make more noise in the league and contend for postseason play.

The squads looked at this week were Iowa, Michigan, Ohio State, Rutgers, and Wisconsin.

Banner #4 – Podcast on the Brink and AC Radio

After a long hiatus, Inside the Hall’s Podcast On The Brink returned this week with the Indianapolis Star’s Tyler Tachman to discuss the expectations IU has this season.

Meanwhile, AC Radio had its normal Thursday show, and Doing The Work also returned after some time off.

Inside the Hall continued to compile player interviews from media day at the end of last month.

• Men’s Soccer tied Michigan and got a huge victory over Notre Dame.

• Football battled hard for three quarters on homecoming but continued non-existent offensive line play allowed Michigan to pull away late for an easy win. It was also announced that this Saturday’s home game against Maryland will kick off at 3:30 pm on ESPN2.

• Volleyball was overmatched by Wisconsin and fell in a very winnable match at Iowa.

• Women’s Soccer’s offensive issues continued against Nebraska this week as they were shut out for the 10th time in 12 games this season.

• Swimming and Diving beat Kentucky to open the season.

• Women’s Golf saw grad transfer Alexis Florio shoot the lowest round score in program history as she finished third individually at a tournament in Virginia.

• Men’s Tennis competed in an exhibition event at Michigan State.

• Women’s Tennis had an athlete compete at the ITA All-American Championships.