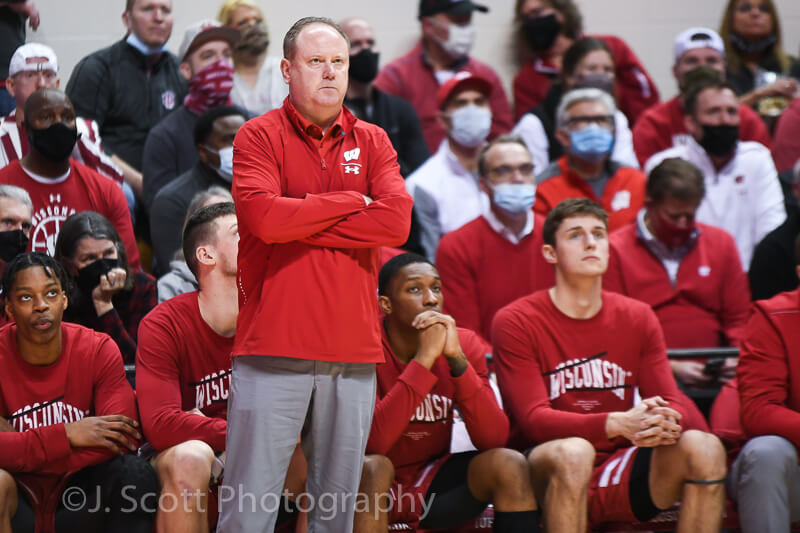 Greg Gard hasn’t experienced quite the level of success as Bo Ryan did at Wisconsin, but he’s kept the Badgers in the conference’s upper echelon.

Each year, the Badgers lose notable contributors and a falloff is expected. Last season, Wisconsin lost four starters and was picked to finish 10th in the conference in a preseason poll of league media. Behind an All-American season from Johnny Davis, Wisconsin went 15-5 in league play.

Entering the 2022-23 campaign, Wisconsin is again expected to tumble down the league standings. Davis is now in the NBA and Brad Davison graduated after five seasons. If Wisconsin finishes at or near the top of the Big Ten, Gard will have successfully leaned on three returnees.

Chucky Hepburn, Tyler Wahl and Steven Crown, all starters, are back in Madison. Hepburn averaged 7.9 points, 2.3 assists and 2.1 rebounds in 31 minutes per game as a true freshman. With the departures of Davis and Davison, he’ll need to create more offense for himself in his second season. Hepburn shot 34.8 percent last season on 3s, but just 38.8 percent overall from the field.

The 6-foot-9 Wahl is a legitimate All-Big Ten candidate. He averaged 11.4 points and 5.9 rebounds last season and is the team’s leading returning scorer. Wahl shot 51.6 percent from the field last season and can play both forward spots.

The 7-foot Crowl has improved each season in Madison. Last season, he played 25.3 minutes per game and put up 8.8 points and 4.4 rebounds per game. He’s not the same caliber of player as some of the Big Ten’s elite bigs but is good enough to hold his own on most nights.

Beyond those three contributors is where Wisconsin has questions to answer. Wofford transfer Max Klesmit and junior Jordan Davis are the most likely pieces to join the starting lineup. Klesmit, a Wisconsin native, averaged 14.9 points at Wofford and is a career 34.5 percent 3-point shooter. Jordan Davis, the twin brother of Johnny, only played 6.5 minutes a game last season. With his brother and Davison gone, he’ll have every opportunity to claim a much larger role.

Green Bay transfer Kamari McGee is likely to back up Hepburn at the point. McGee is also a Wisconsin native. He averaged 11.6 points last season, but Green Bay was one of the worst teams in all of Division I. Other potential contributors in the backcourt and on the wing are senior Jahcobi Neath, walk-on Isaac Lindsey and freshman Connor Essegian.

Wisconsin’s frontcourt depth is thin behind Wahl and Crowl. Markus Iver, a 6-foot-9 sophomore from Estonia, barely played last season but could be the first man off the bench up front. Chris Hodges, a 6-foot-9 redshirt freshman, gives Gard some size behind Crowl. Carter Gilmore, a 6-foot-7 junior, is another lightly used forward who could figure into the rotation at the four.

No matter the personnel, Wisconsin will again be a frustrating team for Big Ten foes to play against. The Badgers rarely turn the ball over, play at a deliberate pace and are tough to beat at the Kohl Center. Interestingly, Gard recently said that Wisconsin could play some zone this season.

Bottom line: Wisconsin went 4-0 in an August trip to France, which gave the Badgers a head start for the 2022-23 season. While the returning trio of Hepburn, Wahl and Crowl is proven, Gard has a lot of holes to fill on the roster. Davis did as much for his team as any player in the Big Ten and Davison was one of the league’s most experienced players. It’s tough to see Wisconsin duplicating last season’s success, but it would also be foolish to bet against the Badgers competing for an NCAA tournament berth once again.

Quotable: “To be honest, the biggest thing I learned is how close we are going to be as a team and how close we are already as a team. That’s one of the biggest things in having a good team and being successful during the year. Aside from the basketball, just having that much time together helps formulate and start your growth of chemistry or accelerate your growth or chemistry of your team. Just through the travel, hotels and sights we saw, in addition to the basketball, brings this group closer together. And you’re not going to be a good team, if you’re not together. From that standpoint, I liked how guys interacted. I didn’t see anybody isolated. I thought that accomplished what we wanted in terms of getting these guys out of their comfort zone a little bit where they have to rely on each other.” – Gard on what his team gained from the trip to France.