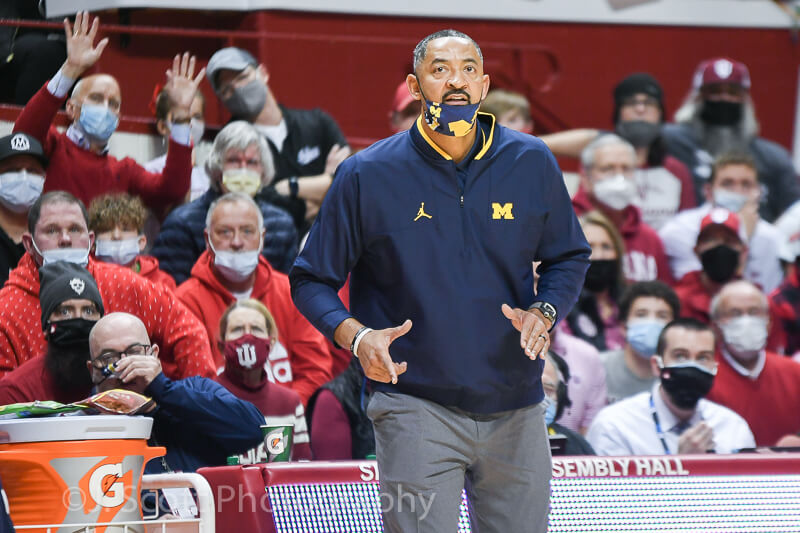 Last season was a roller coaster ride for Michigan. The Wolverines were picked to win the Big Ten, but finished just 11-9 in conference play. Juwan Howard was suspended for five games late in the season for slapping Wisconsin assistant coach Joe Krabbenhoft. When Howard returned, Michigan collapsed against Indiana in the Big Ten tournament, blowing a 17-point second-half lead.

Michigan was, however, to play its best basketball to close out the season in the NCAA tournament. As an 11-seed, the Wolverines beat Colorado State and Tennessee before falling to Villanova in the Sweet Sixteen.

Despite all of the attrition, the pieces are in place to challenge in what should be a wide-open Big Ten title race. Hunter Dickinson, arguably the top returning player in the conference, will again be Michigan’s go-to guy. Dickinson averaged 18.6 points, 8.6 rebounds, 2.3 assists and 1.5 blocks in 32.3 minutes per game as a sophomore. After failing to make a 3-pointer as a freshman, Dickinson made 21 triples last winter.

The likely starter at the four is versatile wing Terrance Williams II. He made 38.5 percent of his 3s last season and averaged 4.7 points and 2.4 rebounds in 15.1 minutes per game last season. Look for Howard’s son, Jett, to start on the wing as a freshman. Howard is 6-foot-8 and is a polished scorer from the perimeter and mid-range.

In the Michigan backcourt, Princeton transfer Jaelin Llewellyn and sophomore Kobe Bufkin should get the first crack at replacing Jones and Brooks. The Wolverines have had success with point guards from the transfer portal and Llewellyn should make an instant impact at the position. The 6-foot-2 guard averaged 15.7 points, 4.1 rebounds and 2.5 assists last season while shooting 38.6 percent on 3s. Bufkin, a 6-foot-4 sophomore, is a former McDonald’s All-American who just turned 19. He has the potential to be a secondary playmaker but is largely unproven after averaging just three points last season.

The depth at the guard position is light as freshman Dug McDaniel is expected to be the backup point guard. Other than McDaniel, Llewellyn and Bufkin, there isn’t another scholarship player on the roster shorter than 6-foot-7. McDaniel is a 5-foot-11 point guard from the DMV area with no shortage of quickness and speed.

Duke transfer Joey Baker, Lebanon native Youssef Khayat, Jace Howard and Isaiah Barnes will battle it out for backup minutes at the three and the four. Baker shot 40.5 percent on 3s last season at Duke and should help space the floor for Dickinson. Khayat is a 6-foot-9 forward who played for the Lebanon senior national team over the summer. His bio on the official Michigan site lists him as an “athletic forward with an explosive and quick first step and vertical jump.” Neither Baker nor Khayat played in Michigan’s August trip to Europe.

Jace Howard, Juwan’s older son, averaged just a point in 4.6 minutes off the bench last season. He and Barnes, another 6-foot-7 wing, could challenge for minutes on the wing if Baker or Khayat falter.

Dickinson’s backup is expected to be 6-foot-10 freshman Tarris Reed Jr. A top 40 recruit in the 2022 class, Reed chose the Wolverines over Michigan State, Purdue, Ohio State and several others. Reed has the size and physicality to compete in the Big Ten immediately but will have the luxury of coming along slowly behind Dickinson.

Bottom line: The range of outcomes for this Michigan team is wide. The Wolverines have the talent to compete for a Big Ten championship. For that to happen, Dickinson must take his game to another level. Michigan’s guard depth is a legitimate question, which could be an issue if there are any injuries. Michigan has to make major strides defensively after finishing just 74th nationally last season in KenPom’s adjusted efficiency rankings.

Quotable: “I’m human, I have feelings, I care. I would not stop caring. It’s been an emotional ride. Did I get sleep last night? No. But I love teaching, I love coaching, I love being here, I miss being with my guys. Yesterday I got an opportunity to sit in front of the media and see some familiar faces that I hadn’t seen in two weeks. And I thought that was great, just to be back and enjoy and take all those questions and get that connection back.” – Howard following his first game back as Michigan’s coach in the Big Ten tournament last season.