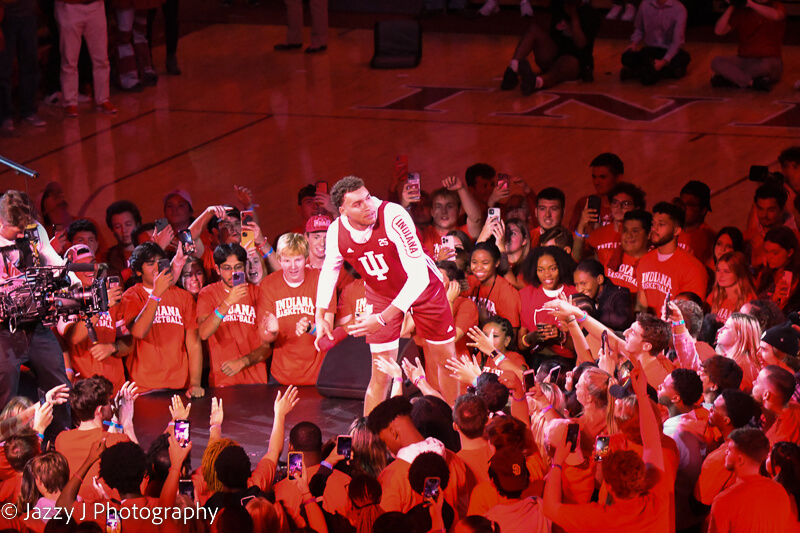 Pyrotechnics, half-court shots, dancing and drop-top Cadillacs. While the events in Simon Skjodt Assembly Hall were certainly anything but normal, and most don’t provide anything to draw from for valid season predictions, something was clear Friday night.

Indiana has the fans. The fans have Indiana. And together, the energy is almost unmatched.

The ideal situation for any sports fan is to be sitting at a sporting event, unable to hear your own thoughts. To be losing your voice cheering, and losing feeling in your hands from clapping.

The Hoosier fans that filled up the lower bowl of Assembly Hall on an October night showed the potential for that ideal situation to become a reality. Indiana fans have never really had an issue showing up for men’s basketball, even when the team was not performing at its best.

But this season, with Indiana predicted to win the Big Ten by just about every major outlet, Trayce Jackson-Davis named a preseason All-American and Mike Woodson bringing in the fifth-ranked recruiting class in the country, the buzz around the Hoosiers is palpable.

Friday night saw the arrival of DJ Gno, the official DJ of Indiana men’s basketball this season. He gave some insight into what the sounds of a home game could be, with remixes of popular songs to entertain the crowd before festivities began and continued through the night.

In the first event of the night, fans got a taste of the energy present in every member of the team. While they obviously won’t be entering the games to a stage and a crowd of students on the floor, the Hoosiers amped up the fans, and everyone in the building fed off each other’s energy.

Throughout, cheers rose with the activities and speeches given by coaches and players. When Miller Kopp drained 3-pointers and Mike Woodson unapologetically used an expletive while describing Indiana basketball, the noise was deafening.

“This arena has always rocked,” Woodson said on Friday. “It doesn’t matter who we play. I think we’ve got the greatest fans in college basketball. I’ve always thought that.”

The fact that a crowd not even close to hitting the limit of Assembly Hall seating was able to make that amount of noise bodes well for the Hoosiers. With many important home games falling on the weekend, Assembly Hall is set to burst with fans.

Last season, Indiana had eight home games that took place on the weekends — including Fridays. Indiana won six of them.

If you extend that to include Thursdays, since many college students don’t have (or just don’t attend) Friday classes, the number only increases.

It can be done. But the presence of crowds at weekend games shouldn’t be discounted.

This season, nine of Indiana’s home games fall on a Friday, Saturday or Sunday. All of those games come after November 24th, and seven of them are against Big Ten opponents — including highly touted teams like Purdue and Michigan.

With the pressure and expectations on the Hoosiers this season, they stand to only benefit from greater crowds. And by the looks of the schedule, they should. A big game on a Tuesday night compared to a big game on a Friday or Saturday is bound to look, and more importantly sound, different.

That’s not to say crowds won’t be large and energetic during the week — it’s still Indiana basketball.

At the very basic level, though, weekend games often mean more seats filled, usually with non-college students or people who aren’t die-hard fans. But occupied seats are occupied seats, and even the casual fan will cheer when Mike Woodson comes out or Trayce Jackson-Davis gets a dunk.

Why? They’re feeding off of the spectators around them. And so are the players. A block, steal or even layup isn’t as invigorating without fans. Showmanship is a part of sports, and a product of fan reactions.

At the end of the day, crowds won’t make or break a team — especially not a team like Indiana. With Jalen Hood-Schifino and Jordan Geronimo dancing as they were introduced and every player walking with a little bit of swagger, it’s clear the Hoosiers can support themselves.

But when Assembly Hall is packed to the brim, the music is blasting and the fans are yelling, the Hoosiers will have that extra edge over their opponents. And there’s nothing wrong with that.