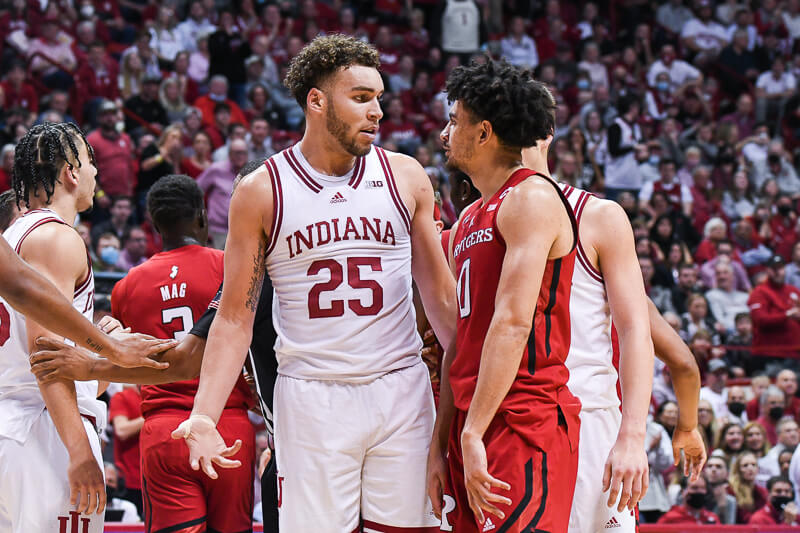 While it was not quite as busy of a time for IU basketball news as it was last week, one major story did break on Thursday evening with the announcement that Race Thompson would be returning to the Hoosiers next season. Outside of that, a few recruiting nuggets happened, Inside the Hall continued its player wrap-up series, and they also looked at which players will possibly be returning to IU and its conference foes for the 2022-2023 season.

Also, Podcast on the Brink and AC Radio had their normal shows this week. We will as usual conclude with a look at how other IU sports are doing, highlighted by another huge transfer pick-up for women’s basketball and the rugby club tearing up the competition.

In brief news, here is a look at how former IU players did in the NBA this season.

• Race Thompson coming back to IU for one more season
• Recruiting Update – Jakai Newton, Gabe Cupps, Dexter Dennis, and Malik Reneau
• Inside The Hall player recaps
• A look at which players might be returning to the Big Ten next season
• Podcast on the Brink and AC Radio
• Hoosier Roundup – Another top transfer for Hoosier women and IU rugby dominating competition

While the status of star big man Trayce Jackson-Davis is still very much up in the air as he explores his NBA options, the Hoosiers got good news from their other starting post player.

At around 6 p.m. on Thursday, Race Thompson tweeted out that he would be coming back to IU for one more season ensuring the Hoosiers have at least one very reliable player inside for the upcoming year. This will be Thompson’s sixth season donning the Cream and Crimson as he redshirted in 2017-2018. He missed a significant portion of the 2018-2019 season with a severe concussion before becoming a regular rotation player in 2019-2020 and has steadily improved every season since. Last year he averaged 11.1 points and 7.5 rebounds and developed a three-point shot at times as the season went on.

As the offseason goes on several recruiting tidbits came to light this week. First off Inside The Hall was able to get an exclusive interview with 2023 commit Jakai Newton. Newton is the no. 62 player in the class according to the 247Sports Composite Rankings and will team with Gabe Cupps (no. 129 in the 247Sports Composite Rankings). Newton discussed meeting his future classmate Cupps for the first time and much more in his interview with Tyler Tachman.

Besides Newton and Cupps, Wichita State transfer Dexter Dennis will take an official visit to IU early this week. The Hoosiers have one open scholarship and potentially two if Jackson-Davis stays in the NBA draft. If that occurs (and maybe even if it does not) the Hoosiers will be looking for additional reinforcements inside. As a result, IU is putting the full-court press on five-star player Malik Reneau (no. 28 in the 247Sports Composite Rankings) who is in Bloomington for a visit this weekend. Reneau is a teammate of incoming top Hoosier commit Jalen Hood-Schifino. Both were seen on campus for Reneau’s visit following the Jordan Brand Classic which both competed in.

Banner #3 – Inside The Hall player recaps

Inside The Hall continued its offseason series this week recapping each player on the team.

The members of IU basketball who were reviewed this week were Khristian Lander, Trayce Jackson-Davis, Parker Stewart, Xavier Johnson, and Michael Durr

Player recaps were not the only item Inside The Hall covered this week. In addition to the reviews of every IU team member from last season, ITH also did a look at who might be coming and going for the Hoosiers as well as where other teams stand with player personnel for the 2022-2023 season.

Podcast On The Brink had a very special episode this week as Tyler Harris of Hoosiers For Good came on the show and discussed his new organization and its role in NIL and how it impacts student-athletes.

Meanwhile, AC Radio had its normal Thursday Radio Show discussing Race Thompson’s return. On the Doing The Work, side an episode about all the transfers coming into the women’s program was recorded to a record number of views. Also, there was a new episode of the Grace Berger Show.

The biggest news this week outside of men’s basketball was the announcement of several highly ranked transfers for the women’s basketball team next season. While stars Grace Berger and Mackenzie Holmes are back, three starting spots need to be filled. IU confirmed the previously known arrivals of Alyssa Geary and Sydney Parrish. They also delighted fans when the press release included the surprise that Sara Scalia was joining the teams as well. Scalia was an elite player at Minnesota and a top-level shooter from long range which is something the Hoosiers have lacked previously. Each transfer should nicely fill the roles vacated by Ali Patberg (drafted by the Indiana Fever), Nicole Cardano-Hillary, and Aleksa Gulbe (invited to Connecticut Sun’s training camp to compete for a spot on their roster).

In a bit of under-the-radar news that is extremely impressive the IU Rugby Club finished the year as undefeated Big Ten Champions at 19-0.

• Softball finished off a sweep of Rutgers and split their first two games against Penn State to improve to 23-11 overall and 6-5 in the conference.

• Baseball was a mixed bag this week splitting a doubleheader with Purdue, knocking off a good Indiana State team in thrilling fashion, and losing in heartbreaking fashion twice to conference leader Rutgers.

• Track and Field competed at The Louisville Invitational.

• Rowing competed at the Big Ten Invite and also had a Conference Boat Of The Week.