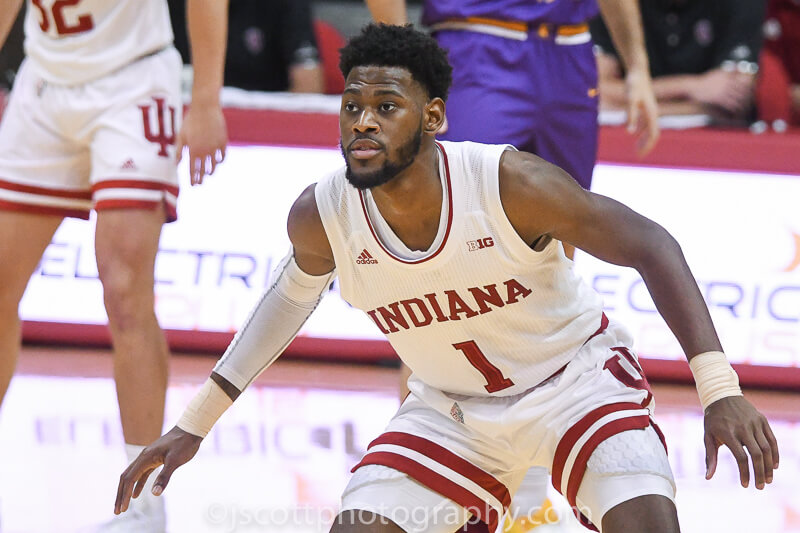 Welcome to “That’s A Wrap,” our player-by-player recap of the 2020-2021 Indiana Hoosiers. Today, our final player recap looks at Al Durham Jr.

As the only Indiana player to suit up in the candy stripes for all four of Archie Miller’s seasons, Al Durham Jr. showed steady improvement over the course of his career.

Durham Jr., who committed to the Hoosiers in October of 2015, was one of three Indiana recruits from the Tom Crean era to stick with the program after Crean’s dismissal in March of 2017. And he was the only one of those three players to play four seasons in Bloomington.

As a senior, the left-handed guard from Lilburn, Georgia, became the 53rd player in program history to eclipse the 1,000-point mark when he scored 15 points in a 73-57 home loss to Michigan on Feb. 27.

After underwhelming 3-point shooting numbers as a freshman (28.6 percent) and sophomore (34.8 percent), Durham Jr. developed into Indiana’s most reliable perimeter threat over his final two seasons for the Hoosiers. As a junior, he shot a career-best 38.3 percent on 3s and he followed that up with a 38 percent mark as a senior. In Big Ten play, Durham Jr. ranked 10th in the Big Ten in 3-point percentage as a junior and ninth as a senior, when he knocked down 41.7 percent of his 3s against Big Ten foes.

Another strong suit of Durham’s game was his ability to get into the lane and draw fouls. While his 2-point shooting numbers for his career were underwhelming – 45.4 percent – he ranked in the top 11 in the conference in free throw rate in each of his last three seasons. Free throw rate, defined as free throws attempted divided by field goals attempted, is a measurement of a player’s ability to get to the free throw line.

As a junior, Durham’s free throw rate of 59.2 percent was second in the conference and his 51.2 percent mark as a senior was seventh-best in the league. In Miller’s offense built on getting the ball into the paint and drawing fouls, Durham’s ability to do just that was a major reason why he hit the 1,000-point plateau.

Defensively, Durham was solid, but often lacked the lateral quickness, length and athleticism to contain some of the league’s best guards. According to Hoop Lens, Indiana allowed 11 points more per 100 possessions with Durham on the floor than without him.

Durham was the only scholarship player to go through the program’s virtual senior day festivities prior to the final home game of the regular season and after Miller’s dismissal, he entered his name into the NCAA transfer portal. In late March, Durham announced that he would complete his career at Providence next season as a graduate transfer.

Bottom Line: Durham was a fan favorite because of his positive attitude, work ethic and competitiveness as a player. He was loyal to Indiana through the coaching change from Crean to Miller and stayed with the program through several difficult seasons. He was unfortunately robbed of the opportunity to play in the NCAA tournament as a junior due to the COVID-19 pandemic, but now he’ll get an opportunity for one more season playing for Ed Cooley in the Big East.

Quotable: “It’s been a blessing, I’ll say, to have the opportunity to play DI, play on the highest stage in America. It’s all of the blessing filled with hard work and pain, sweat and tears… I feel like there’s too many jewels I’ve taken from Indiana, whether that’s relationships, basketball, friendships, anything.” – Durham in February prior to his final game at Simon Skjodt Assembly Hall.