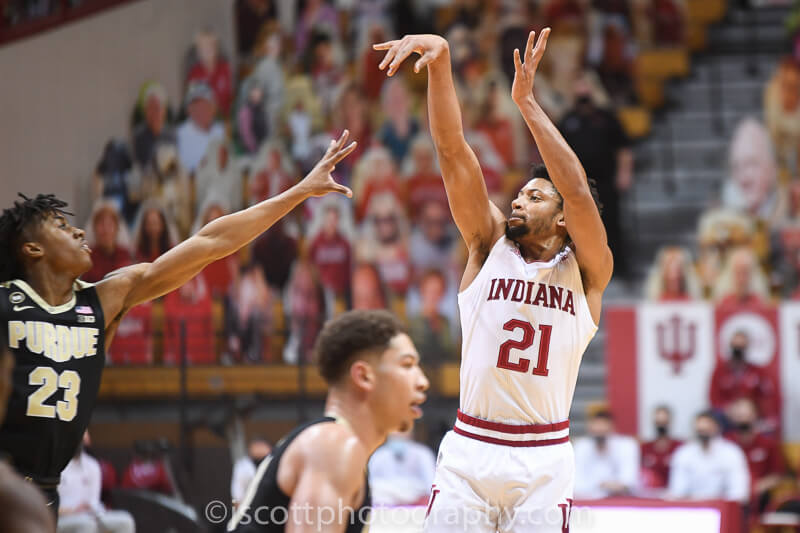 Welcome to “That’s A Wrap,” our player-by-player recap of the 2020-2021 Indiana Hoosiers. Today: Jerome Hunter.

A top 60 player nationally in Indiana’s 2018 recruiting class, Jerome Hunter’s career in Bloomington has yet to take off.

As a freshman, Hunter never suited up for the Hoosiers as a leg injury forced him to have surgery and miss the entire 2018-19 season. For a talented wing who had aspirations of making a major impact from day one at IU, it was a devastating setback.

But a successful surgery and lengthy rehab process put the 6-foot-7 forward in position to return to the floor to begin the 2019-20 season. And over 30 games, Hunter averaged 3.8 points and 2.1 points in 14.4 minutes per game in his redshirt freshman season.

With that season of acclimation under his belt, Hunter entered his third campaign at Indiana with high expectations. His minutes increased by more than five per game, his field goal percentage improved and there were moments where Hunter looked the part of a breakout candidate.

In conference play, his offensive rating of 102 was fourth-best of the rotation regulars behind Race Thompson, Al Durham Jr. and Trayce Jackson-Davis. He shot a solid 57.8 percent on 2s in Big Ten play, the highest mark among Indiana’s frontcourt players.

By the final stretch of the season, Hunter had entered the starting lineup as Armaan Franklin was sidelined by a foot injury. His two most notable performances came in a double-overtime loss at Wisconsin (12 points, seven rebounds) and in an 82-72 win against Minnesota at Simon Skjodt Assembly Hall, when he scored 16 points and shot 5-of-6 from the field and 4-of-5 from the free-throw line.

But there were also moments that set Hunter back from reaching his full potential. In early February, he missed two games in what Archie Miller called a “coach’s decision.” In a loss at Rutgers in late February, Hunter looked visibly upset on the bench and even briefly left the court for the locker room.

Much like several of Indiana’s rotation players who failed to blossom under Miller, there was never a sense that trust from the coach in the player had ever been fully established. That led to what appeared to be a severe lack of confidence from Hunter, who seemed to go in and out of favor in terms of his minutes and his role.

By the end of the season, it was clear that Hunter’s confidence in his shot had eroded significantly. Over Indiana’s final three games of the season, he shot just 2-of-13 from behind the 3-point line.

Despite those late-season struggles, Hunter didn’t waver in his commitment to the program following Miller’s dismissal. In a college basketball offseason that has seen over 1,400 players opt for a transfer, it would have been easy for Hunter to seek a new start elsewhere. But he never entered the portal. And with Mike Woodson’s hiring, Hunter could be a player that fully blossoms in the future if he can find his way into the rotation next winter.

Bottom Line: Even with his injury setbacks, Hunter remains one of the most talented players in the Indiana program. When he’s playing with confidence, he can space the floor effectively. That shooting ability could mesh well in an offensive system under Woodson that’s expected to be “one-in, four-out.” He can also play either the three or the four, but the keys for him to differentiate himself next season will be defense and rebounding. If he can do those two things with consistency, he should be able to carve out a role despite increased competition for minutes.

Quotable: “Jerome has had a tough go of it. His injury was not one most people have. He is not the same athlete that he once was. He does not have the same ability that other guys have to recover. Jerome is a confident player and when he is a coachable confident player and embracing what he is doing, he is very competitive. The thing I like most about Jerome is he competes every day. He brings a competitive spirit to practice and right now he is not messing around. I think he knows his time has come to step up and play for our team. His attitude is good and what he has been doing the last two weeks of practice he has been able to do for us in the game.” – Miller on Hunter following Indiana’s win against Minnesota.