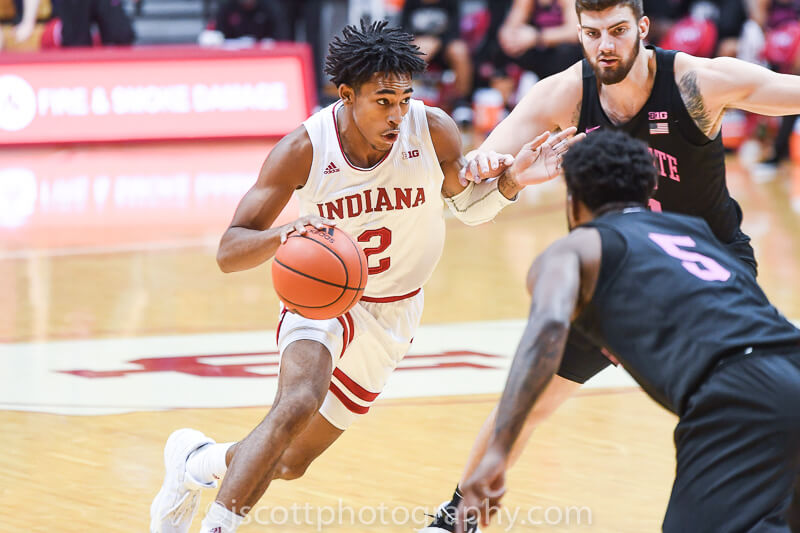 Welcome to “That’s A Wrap,” our player-by-player recap of the 2020-2021 Indiana Hoosiers. Today: Armaan Franklin.

In an Indiana basketball season that lacked positive storylines, the emergence of Armaan Franklin as a featured backcourt scorer was one of the few bright spots.

As a freshman, the Cathedral product was thrust into the starting lineup out of necessity. Early season injuries to Devonte Green and Rob Phinisee left Indiana’s backcourt depth thin and Archie Miller was forced to play Franklin major minutes immediately.

Franklin started Indiana’s first nine games during the 2019-20 season and even though his playing time waned considerably down the stretch, he did average a respectable 3.7 points, 1.6 rebounds and 1.3 assists in 13.8 minutes per game.

While he did struggle mightily with 3-point shooting (26.6 percent), Franklin did show promise with his defense. Those unexpected minutes in his first season would pay dividends as a sophomore.

In his second season in Bloomington, Franklin was clearly Indiana’s second-best player through the team’s first 10 games. He started slow offensively. Over the season’s first five games, he had just one double-figure scoring output. It came against Stanford in the Maui Invitational in Asheville.

But Franklin would hit his stride beginning with a 19-point outburst against North Alabama on Dec. 13 at Simon Skjodt Assembly Hall. He followed that up with 20 points in a 68-60 win against Butler in the Crossroads Classic and exploded for 23 points in a 69-60 loss at Illinois on Dec. 26.

Through Indiana’s first 10 games, Franklin was averaging 13.8 points per game and was 20-of-41 from behind the 3-point line.

The momentum for Franklin, however, was quickly halted when he suffered an ankle injury during a 63-55 win against Rutgers on Jan. 4. Franklin would miss Indiana’s next two games as a result of the injury before returning to the lineup to play 33 minutes off the bench in an 81-69 loss to Purdue on Jan. 14.

Franklin would go on to have several notable performances the rest of the season, but he never seemed to be at 100 percent health after the ankle injury against the Terps. He struggled for nearly the entire game against Iowa on Feb. 7 at home but stepped up and hit the game-winning shot to lift the Hoosiers to a 67-65 triumph. He followed that performance with 23 points in a double-overtime win against Northwestern on Feb. 10 in Evanston.

The injury bug would hit Franklin again late in the season as he suffered an injury to his other foot in a 74-63 loss at Rutgers on Feb. 24. That setback forced him to miss Indiana’s next three games – all losses – and Franklin returned for the season finale against Rutgers in the Big Ten tournament.

In total, Franklin’s sophomore season represented a major step forward from his debut season. He shot 44.4 percent on 3s in Big Ten play, good for fourth in the conference. His 42.4 percent 3-point shooting overall led the team. He was second on the team in scoring, second in free throw percentage, second in steals despite missing five games and third in assists and rebounds per game.

When he was on, Franklin showed himself capable of carrying Indiana offensively for stretches. He had three games where he knocked in five 3-pointers and four more where he knocked in four or more. Before his injury, he certainly looked the part of one of the Big Ten’s most improved players.

In the aftermath of Archie Miller’s firing in mid-March, Franklin opted to put his name in the transfer portal. And on April 8, he announced that he was transferring to Virginia, where he’ll be eligible to compete immediately for the Cavaliers.

Bottom Line: Indiana has been able to soften the blow of losing Franklin by adding Xavier Johnson from Pittsburgh and signing four-star guard Tamar Bates, but his departure was the one notable setback this spring for new coach Mike Woodson. Franklin has great size for a guard, is a capable shooter and should continue to flourish in his new home in Charlottesville.

Quotable: “I know he wanted to prove to himself this year what kind of player he is. I already knew he was capable of doing all these things, and all the work is starting to show out here.” – Trayce Jackson-Davis on Franklin following Indiana’s win against Butler at Bankers Life Fieldhouse.