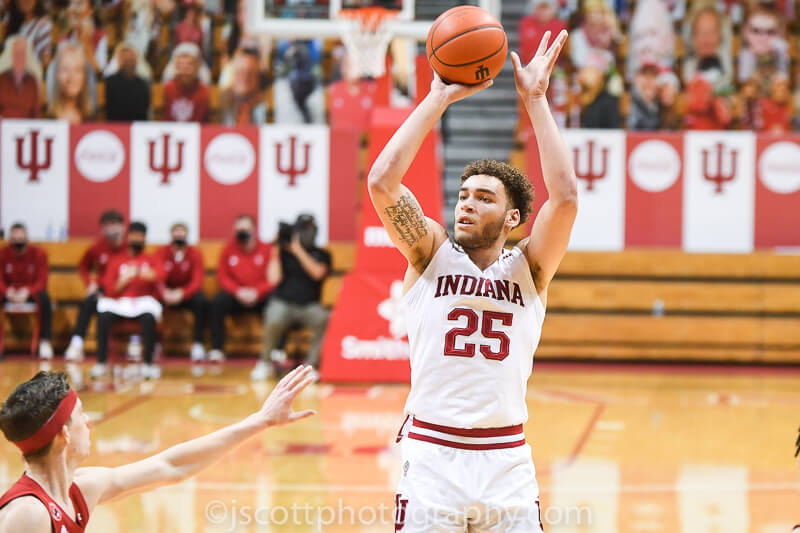 Welcome to “That’s A Wrap,” our player-by-player recap of the 2020-2021 Indiana Hoosiers. Today: Race Thompson.

Race Thompson blossomed into one of the Big Ten’s most reliable frontcourt performers in his fourth season in Bloomington.

The Minneapolis native, who was the first player to commit to the Hoosiers under Archie Miller, redshirted during the 2017-18 season and had a minimal role in the 2018-19 season due to a concussion.

As a redshirt sophomore, Thompson averaged 13.9 minutes over 29 games and scored 3.7 points per game while pulling down 3.9 rebounds per game. But Thompson was behind both Trayce Jackson-Davis and Joey Brunk in the rotation and despite the fact that he frequently outplayed Brunk, the 6-foot-8 forward didn’t start a single game in the 2019-20 campaign.

Thompson’s redshirt junior season, however, brought opportunity. The hard-nosed forward was voted a co-captain in the preseason and he started all 27 of Indiana’s games.

Thompson, who struggled with injuries for most of his IU tenure, was in the best shape of his career after putting in work during the early months of the COVID-19 pandemic. That hard work paid off early.

In Indiana’s second game of the season – a 79-58 rout of Providence in the Maui Invitational at Asheville – he poured in a career-high of 22 points and grabbed 13 rebounds. He continued his strong play in that event with 15 points, eight rebounds, four blocked shots, three assists and two steals in a 79-63 win against Stanford.

The strength of Thompson’s offensive game was his ability to score at the rim and get to the foul line. In Big Ten play, he shot 53.3 percent on 2s, which was 19th best in the conference according to KenPom.

He was second in the conference in free throw rate (FTA/FGA) at 67.8. For the season, he ranked 15th nationally in that statistic at 67.5 percent. He did, however, struggle to convert once he got to the stripe. Thompson shot just 61.4 percent from the line on the season and 62.5 percent in conference games.

Thompson did step out and attempt an occasional 3-pointer, but was just 3-of-15 on the season. That’s a part of his game he’ll have to improve upon to help the Hoosiers better space the floor under new coach Mike Woodson.

While Thompson’s production was clearly valuable to Indiana, his leadership and toughness was equally important. Despite being hit inadvertently in the face in practice late in the season, Thompson played through the pain and finished the year wearing a protective mask over his nose for the final five games.

After Miller was fired at the conclusion of the season, Thompson entered the transfer portal, but eventually opted to return to Bloomington, where he’ll be a major part of Woodson’s first Indiana team next season.

“After talking it over with my family I’m happy to announce I’m coming back to Indiana,” Thompson wrote on social media on April 8. “I’m excited for coach Woodson and the future of the program.”

Bottom Line: Keeping Thompson in the fold was a major recruiting win for Woodson and the new Indiana staff for next season. He’s a leader both on and off the court. He doesn’t shy away from making plays that don’t show up in the boxscore but contribute to winning games. Thompson is also one of the Big Ten’s best shot blockers. If he can improve his free throw shooting in the offseason, he should be a double-figure scorer next season, which will be his fifth in Bloomington.

Quotable: “His emergence, to me, is one of the special things about this offseason and just watching him get a little bit of reward for what he did. … I’m so happy for him just because of his development the last eight months, his attitude, his leadership, and how he plays is how he practices every day.” – Miller on Thompson following Indiana’s win over Providence.