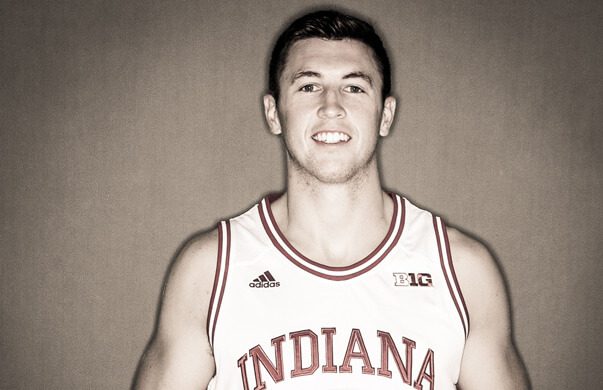 With the start of college basketball season on the horizon, we’re taking a long look at the conference at large as well as Indiana’s roster this month. Today, we continue our look at Indiana’s roster with Ryan Burton.

But the Bedford native, who played his first two seasons of college basketball at Division II power Bellarmine, made an impact in a big spot for the Hoosiers last season.

In a game deadlocked at 51 between IU and Penn State at Assembly Hall last January, Tom Crean looked down the bench for a spark. And he called on Burton.

The junior forward responded with three offensive rebounds in five minutes, including one that led to a pivotal 3-pointer by James Blackmon Jr. When Burton departed, the Hoosiers led by 10.

“He was ready when his name was called,” Crean said after the win. “That’s what you want as much as anything else. But sometimes you’re feeling your way through it, and you’re looking for that dose. I thought Ryan’s five minutes for us were a really, really valuable five minutes.”

As Burton enters his final season in Bloomington, his name won’t be on many opposing scouting reports. He probably won’t be a regular in IU’s rotation. But the value of a veteran like Burton extends beyond just his on the court impact.

The 6-foot-7 forward, an accounting and finance major in the Kelley School of Business, was named to the National Association of Basketball Coaches (NABC) honors court for excelling in academics last season. He’s also been a positive influence in IU’s locker room and in practice.

Now as a senior, Burton will be looked upon to continue providing leadership on a team with major expectations.

“Coach has the confidence in me and the other seniors in Max, Nick and Yogi to lead,” Burton told IUHoosiers.com earlier this fall.  “I’m just thankful for this opportunity and I treasure every moment of being a part of this program.”

Bottom Line: Walk-ons are often under appreciated in major college sports. They must fulfill all of the responsibilities of their peers, but without the benefits of a scholarship. For Burton, it’s clear that he relishes the opportunity to put on the IU uniform and be a part of the program, especially given the fact that he grew up a fan of the program. Burton’s on court impact is likely to be minimal as a senior and players like Max Bielfeldt, Juwan Morgana and O.G. Anunoby will be in front of him in the rotation. But his work in practice as well as his locker room presence hold tremendous value for the Hoosiers.

Quotable: “Growing up just 20 minutes from here, my parents having season tickets all the time, me coming up here when I was little, it’s definitely a dream come true. Playing at Bedford North Lawrence with Damon Bailey coming out of there, it’s definitely an honor just to be mentioned in the same sentence as him.” – Burton in the summer of 2014.