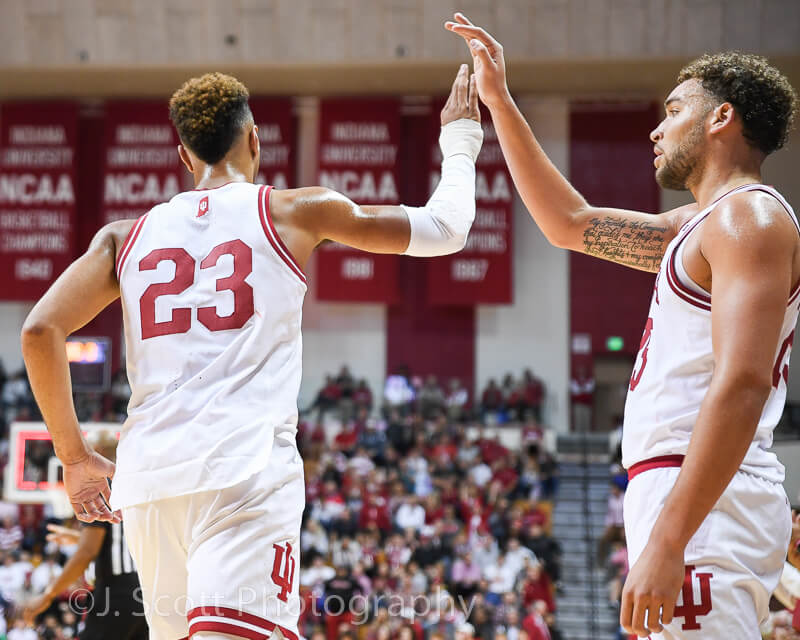 The final exhibition game was played last Thursday night and the Hoosiers gave their fans no reason to believe they won’t meet preseason expectations despite the relatively hapless opposition. The regular season and games that count begin tomorrow and one final preseason poll and player award continue to feed the hype that IU should finally be among the best teams in college basketball again.

Away from the court, Podcast on the Brink and Assembly Call had shows this week, Inside the Hall wrapped up its player preview series, and Indiana’s head coach had his popular radio program return. We will as usual conclude with a look at how other IU sports are doing.

While contests against NAIA schools only can teach a team so much, IU passed the test in their final exhibition game with flying colors 104-59. Once again the five-star freshmen duo of Jalen Hood-Schifino and Malik Reneau showed they will be ready to contribute right away for Indiana with 15 points each. Also, Trayce Jackson-Davis returned from a minor injury and looked in midseason form with 19 points.

The final preseason poll came out in the form of the Sagarin Ratings and once again the prognostication is high on the Hoosiers as they come in at 11th. The one major difference though is Sagarin is much higher on the Big Ten as a whole than any other service as IU’s ranking is only third highest in the conference behind No. 8 Michigan and No. 9 Illinois. Also, right behind Indiana is No. 13 Purdue, No. 16 Michigan State, No. 20 Ohio State, and No. 22 Iowa.

Inside the Hall has compiled where the Hoosiers stand in various polls with the 2022-2023 campaign about to get underway. The highest IU is slotted is sixth by Lindy’s Sports and the lowest is 20th by The ALMANAC.

Trayce Jackson-Davis also received more preseason recognition as he was named to the watch list for the NABC player of the year award.

Banner #3 – Podcast on the Brink and AC postgame show

Podcast on the Brink had a new episode last week with William McDermott to take fan questions heading into the season. Meanwhile, Assembly Call had no radio program on Thursday due to the exhibition contest. However, the postgame show afterward took its place instead.

Doing The Work, like POTB had a show this week that took questions from listeners. Doing The Work now has its own podcast feed and Twitter account as Inside The Hall and Assembly Call continue to increase coverage of the women’s basketball team.

With the season about to begin tomorrow, Inside the Hall wrapped up its player preview series with the lone Hoosier who had not yet been broken down. The final team member to be looked at is sixth-year senior and longtime glue guy Race Thompson.

For the first time this season, Mike Woodson’s weekly radio show aired last Monday. The program will air most weeks throughout the basketball season. One of the night’s highlights was Woodson confirming what everyone has seen in the exhibition games with praise for the Hoosiers’ two five-star freshmen.

• Men’s Soccer was three minutes from a Big Ten championship before conceding a late goal to Maryland to end the match in a draw. In a twist of irony, that result and finishing fourth in the league gave the Hoosiers a much tougher path in the conference tournament. This more challenging slate gives the team a better chance to improve their seed for the NCAA Tournament. Indiana beat Penn State in the first round of the Big Ten tourney and faces Maryland on the road in the semi-finals Wednesday at 8 pm on BTN. Also, Ryan Wittenbrink who continues to have a breakout year offensively and scored both goals this week was honored by the conference as were several others.

• Wrestling opened its season with a victory over SIUE.

• Football was embarrassed by Penn State for their sixth straight loss.

• Volleyball had a tough week against elite opponents Purdue and Nebraska.

• Men’s Tennis competed in a tournament at Notre Dame.

• Track and Field announced their schedule for the upcoming season.

• Field Hockey had two players honored with postseason awards from the Big Ten.